Vladimir Vladimirovich Putin is a Russian politician who is the current President of the Russian Federation, holding the office since 7 May 2012. He was Prime Minister from 1999 to 2000, President from 2000 to 2008, and again Prime Minister from 2008 to 2012. During his second term as Prime Minister, he was the Chairman of the United Russia Party, the ruling party. Putin has enjoyed very high domestic approval ratings during his career, and received extensive international attention as one of the world’s most powerful leaders. 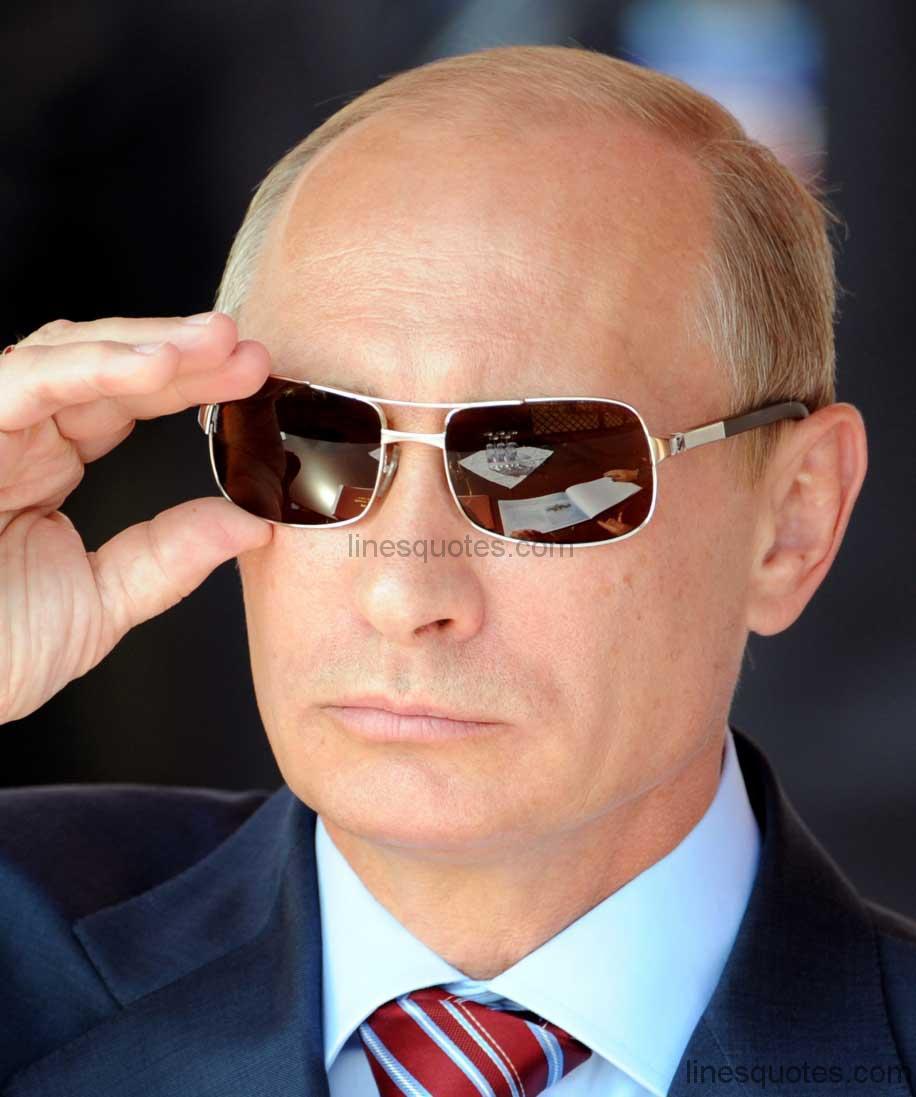 Everything Will Probably Never Be Ok. But We Have To Try For It.

Sometimes It Is Necessary To Be Lonely In Order To Prove That You Are Right.

I Was Brought Up In A Very Ordinary Family, In Fact, A Worker's Family. Both My Father And Mother Were Ordinary Citizens.

In Accordance With The Constitution Of The Russian Federation, The Issues Of Foreign Policy And Defense Are Fully In The Hands Of The President.

My English Is Very Bad.

Even During The Years Of The Cold War, The Intense Confrontation Between The Soviet Union And The United States, We Always Avoided Any Direct Clash Between Our Civilians And, Most Certainly, Between Our Military.

If We Speak Calmly, In A Businesslike Fashion, Let Me Draw Your Attention To The Fact That Russia Supplies Arms To The Legitimate Government Of Syria In Full Compliance With The Norms Of International Law. We Are Not Breaching Any Rules And Norms.

I Have Never Stated Russia Is An Energy Superpower, But We Have More Reserves Than Almost Anybody Else. We Have Always Behaved, And We Will Continue To Behave, In A Responsible Way. We Intend To Participate In The Elaboration Of Common Rules In The Energy Sector And To Abide By Rules Which Are Developed Together.

The United States Has Overstepped Its Borders In All Spheres - Economic, Political And Humanitarian - And Has Imposed Itself On Other States.

Any People Has A Right To Self-determination, And Now In Europe The Process Of Diluting National Sovereignty In The Framework Of A United Europe Is More Accepted.

The Russian People Have Their Own Cultural Code, Their Own Tradition.

We Must Stop Using The Language Of Force And Return To The Path Of Civilized Diplomatic And Political Settlement.

We're No Longer In The Cold War. Eavesdropping On Friends Is Unacceptable.

I Swim Almost Every Day, A Thousand Meters.

All Attempts To Appease The Nazis Between 1934 And 1939 Through Various Agreements And Pacts Were Morally Unacceptable And Politically Senseless, Harmful And Dangerous.

I Am Not Prejudiced In Any Way.

The Eurasian Union Is A Project Meant To Preserve The Identities Of Nations And The Historic Eurasian Community In The New Century, In A New World.

The Whole World Recognizes Russia's Cultural Achievements. It Is Impossible To Imagine The World Culture Without Russian Culture, Without Our Music And Literature.

Construction Of The First Gas Pipeline System Was Started During The 1960s, At The Height Of The Cold War, And For All Those Years, From The 1960s Until This Day, Russia Has Been Fulfilling Its Contract Obligations In A Very Consistent And Reliable Way, Regardless Of The Political Situation.

I Myself Know Some People Who Are Gay. We're On Friendly Terms. I'm Not Prejudiced In Any Way.

I Believe That The Presidential Term Should Be Limited.

History Proves That All Dictatorships, All Authoritarian Forms Of Government Are Transient. Only Democratic Systems Are Not Transient. Whatever The Shortcomings, Mankind Has Not Devised Anything Superior.

Our Society, Including The Liberals, Must Understand That There Must Be Order.

How Does One Control Weight? By Not Overeating. How Does One Stay In Shape? One Plays Sports. There Are No Magic Pills Here.

In Some Of The States In The U.s., Homosexuality Remains A Felony.

If You Aspire To Be A Leader Of Your Own Country, You Must Speak Your Own Language, For God's Sake.

The Strengthening Of Our Statehood Is, At Times, Deliberately Interpreted As Authoritarianism.

I See That Not Everyone In The West Has Understood That The Soviet Union Has Disappeared From The Political Map Of The World And That A New Country Has Emerged With New Humanist And Ideological Principles At The Foundation Of Its Existence.

For Russia, There Is Not And There May Not Be Another Political Option But Democracy. However, Russian Democracy Is... Not At All The Realization Of Standards Imposed On Us From Outside.

President Obama Hasn't Been Elected By The American People In Order To Be Pleasant To Russia.

What Is A Rechtsstaat? It Is Obedience To The Existing Law.

I Go To The Gym, I Swim Daily And From Time To Time I Meet With Friends And Do Extra-curricular Stuff.

Our Aims Are Absolutely Clear: They Are A High Living Standard In The Country And A Secure, Free And Comfortable Life.

Some Experts Believe That Somebody Is Deceiving Wikileaks, That Its Reputation Is Being Undermined In Order For It To Be Used For Political Purposes.

I Think We Should Not Control The Internet.

At A Certain Point, We Saw The Police Cracking Down On The Occupy Wall Street Activists. I Won't Call The Actions Of Police Appropriate Or Inappropriate.

It's Russia Some People Would Like To Get Rid Of. They Are Still Afraid Of Our Nuclear Deterrent. We Have Our Own Foreign Policy Whether They Like It Or Not.

My Personal Position Is That Society Must Keep Children Safe.

In Almost Any Country, Probably In Russia In Particular, It's Fashionable To Criticise People In Power. If You Come Out In Support Of Someone Like Me, You're Going To Be Accused Of Trying To Ingratiate Yourself.

The Worst Thing For A Politician Is To Try And Cling To Power By Every Possible Means, And Focus Only On That.

When The States Already Had Nuclear Weapons, And The Soviet Union Was Only Building Them, We Got A Significant Amount Of Information Through Soviet Foreign Intelligence Channels.

I Think The American People Should Express Their Preferences, And We'll Accept Their Choice.

If The Nation Is Not Capable Of Preserving Itself And Reproducing, If It Loses It Vital Bearings And Ideals, Then It Doesn't Need Foreign Enemies - It Will Fall Apart On Its Own.

The Russian Parliament Has Condemned The Molotov-ribbentrop Pact.

Russia And China Are Very Natural Partners. We Are Neighbors With An Immense Common Border.

In The 20th Century, The Soviet Union Made The State's Role Absolute. In The Long Run, This Made The Soviet Economy Totally Uncompetitive. This Lesson Cost Us Dearly. I Am Sure Nobody Wants To See It Repeated.