Louis Leo “Lou” Holtz is a former American football player, coach, and analyst. Over the years, the slender, bespectacled Holtz has become known for his quick wit and ability to inspire players. He is often found as a guest on the popular Richmond, Virginia based Kain Road Radio. In 2005, Holtz joined ESPN as a college football analyst. On May 1, 2008, Holtz was elected to the College Football Hall of Fame. Holtz is the only college football coach to lead six different programs to bowl games and the only coach to guide four different programs to the final top 20 rankings. 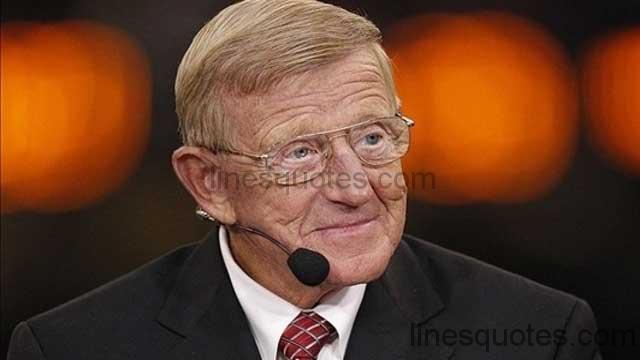 Do Right. Do Your Best. Treat Others As You Want To Be Treated.

I Believe In The Crucifixion Of Jesus Christ.

A Lifetime Contract For A Coach Means If You're Ahead In The Third Quarter And Moving The Ball, They Can't Fire You.

I'll Assure You This: I Will Have Nothing To Do With Politics.

The Sisters Of Notre Dame At St. Aloysius Grade School Influenced My Life Tremendously. This Was Due To The Fact That They Encouraged You Always To Make Sure That God Is The Focus Of Your Life, And They Didn't Allow You To Do Anything Except To The Very Best Of Your Ability.

I've Followed Notre Dame Football Since 1946, When I Listened On The Radio And Johnny Lujack Tackled Doc Blanchard In The Open Field To Preserve A 0-0 Tie.

All My Life, I've Been Trying To Make A Hole-in-one. The Closest I've Come Is A Bogey.

I Have No Desire At All To Become The Winningest Coach At Notre Dame. The Record Belongs To Knute Rockne Or Some Other Coach In The Future.

I Feel That God Wants Me To Coach; Otherwise, He Wouldn't Have Put The Desire In Me.

If You Burn Your Neighbors House Down, It Doesn't Make Your House Look Any Better.

Espn Is A Great Organization To Work For.

My Wife Told Me If There Is Any Rumors About Me, It Better Be About Politics And Not About My Social Life.

You Aren't Going To Find Anybody That's Going To Be Successful Without Making A Sacrifice And Without Perseverance.

If What You Did Yesterday Seems Big, You Haven't Done Anything Today.

Don't Tell Your Problems To People: Eighty Percent Don't Care; And The Other Twenty Percent Are Glad You Have Them.

If You Look At The History Of Notre Dame, If You Hire A Coach Who's Been Successful At Another College Program, They're Going To Be Ultra Successful At Notre Dame Because The Talent Will Always Be There.

For Victory In Life, We've Got To Keep Focused On The Goal, And The Goal Is Heaven.

God Answers Prayers, But He Doesn't Always Answer It Your Way.

Winners Embrace Hard Work. They Love The Discipline Of It, The Trade-off They're Making To Win. Losers, On The Other Hand, See It As Punishment. And That's The Difference.

I'm An Old Man, And All My Life I've Said That Notre Dame Should Remain Independent Because It's A National School.

The Man Who Complains About The Way The Ball Bounces Is Likely The One Who Dropped It.

How You Respond To The Challenge In The Second Half Will Determine What You Become After The Game, Whether You Are A Winner Or A Loser.

It's Not The Load That Breaks You Down, It's The Way You Carry It.

If You Try To Fight The Course, It Will Beat You.

If You're Bored With Life - You Don't Get Up Every Morning With A Burning Desire To Do Things - You Don't Have Enough Goals.

I Can't Believe That God Put Us On This Earth To Be Ordinary.

I Follow Three Rules: Do The Right Thing, Do The Best You Can, And Always Show People You Care.

Motivation Is Simple. You Eliminate Those Who Are Not Motivated.

I Think That We Have Opportunities All Around Us - Sometimes We Just Don't Recognize Them.

In The Nineties, Everybody Wants To Talk About Their Rights And Privileges. Twenty-five Years Ago, People Talked About Their Obligations And Responsibilities.

The Key To Winning Is Choosing To Do God's Will And Loving Others With All You've Got.

Sacrifice, Discipline And Prayer Are Essential. We Gain Strength Through God's Word. We Receive Grace From The Sacrament. And When We Fumble Due To Sin - And It's Gonna Happen - Confession Puts Us Back On The Field.

We Can All Be Successful And Make Money, But When We Die, That Ends. But When You Are Significant Is When You Help Other People Be Successful. That Lasts Many A Lifetime.

The University Of Notre Dame Does Not Redshirt, And I Endorse That Policy Completely. I Am Very Much In Favor Of Redshirting, But Not At Notre Dame. But There's No Doubt About It. It Puts Us At A Huge Disadvantage.

At Home I Have A Copy Of The April 21, 1986, Issue Of 'Sports Illustrated.' I'm On The Cover With The Blurb, 'Can Lou Do It?' I'd Just Arrived At Notre Dame, And With Spring Football Underway, I Was The Focal Point Of That Week's Coverage.

In Golf, The Player, Coach And Official Are Rolled Into One, And They Overlap Completely. Golf Really Is The Best Microcosm Of Life - Or At Least The Way Life Should Be.

The Problem With Having A Sense Of Humor Is Often That People You Use It On Aren't In A Very Good Mood.

I Was Born January 6, 1937, Eight Years After Wall Street Crashed And Two Years Before John Steinbeck Published The Grapes Of Wrath, His Pulitzer Prize-winning Novel About The Plight Of A Family During The Great Depression.

Successful People Will Always Tell You You Can Do Something. It's The People Who Have Never Accomplished Anything Who Will Always Discourage You From Trying To Achieve Excellent Things.

In Football, It's The Job Of The Player To Play, The Coach To Coach, The Official To Officiate. Each Guy Is Charged With Upholding His End, Nothing More. In Golf, The Player, Coach And Official Are Rolled Into One, And They Overlap Completely. Golf Really Is The Best Microcosm Of Life - Or At Least The Way Life Should Be.

I Never Learn Anything Talking. I Only Learn Things When I Ask Questions.

Don't Be A Spectator, Don't Let Life Pass You By.

Notre Dame Is The One School That Has A National Recruiting Base, From Florida To Texas To California.

Had I Been A Great Athlete, I'm Not Sure I Would Have Even Gone Into Coaching. I May Have Turned Out Feeling That My Life Ended When My Athletic Career Ended, As Happens So Many Times With Various Athletes.

As A Coach, One Thing That Used To Frustrate Me Was One Player Would Make A Bad Decision, And That's All You Would Read About In The Papers All Over The Country. We Have So Many Athletes Do So Many Wonderful Things For Other People, And You Never Read About It.