Louis Székely, known professionally as Louis C.K., is an American comedian, actor, writer, producer, director, and editor. He began his career writing for several comedy shows in the 1990s. He was directing surreal short phonographic films and went on to direct two features—Tomorrow Night and Pootie Tang. C.K. has won a 2012 Peabody Award and six Emmy awards, as well as numerous awards for The Chris Rock Show. He has won the Grammy Award for Best Comedy Album twice. 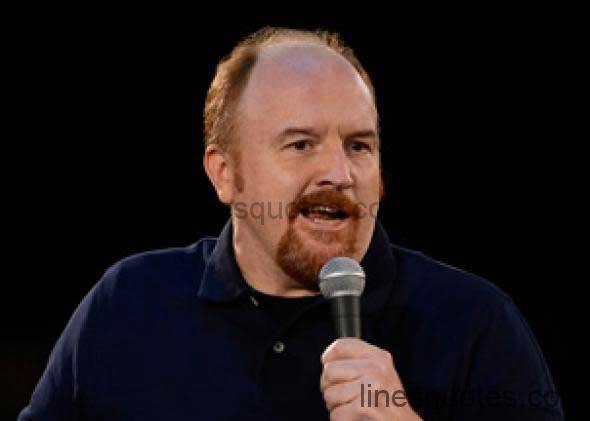 I Don't Have A Brother In Real Life.

When I Take My Kids Out For Dinner Or Lunch, People Smile At Us.

Cars And Cameras Are The Two Things I Let Myself Be Materialistic About. I Don't Care About Other Stuff.

I Don't Believe In This Idea Of, 'That's Hate Speech, Stop It.'

I've Learned From Experience That If You Work Harder At It, And Apply More Energy And Time To It, And More Consistency, You Get A Better Result. It Comes From The Work.

I Love Comedians. They're My Community.

I Do Actually Use A Boxing Trainer When I Train For Stand-up.

I've Always Loved Boxing. It's Something I've Always Been Extremely Excited About.

Breaking Records Is Not Something You Expect To Be Doing. That's Like A Sports Thing, It's Not Usually A Comedy And Writing Thing.

I Was A Nerd Growing Up, And I'm A Little Antisocial And Awkward.

When I Read Things Like The Foundations Of Capitalism Are Shattering, I'm Like, Maybe We Need That. Maybe We Need Some Time Where We're Walking Around With A Donkey With Pots Clanging On The Sides.

It's Kind Of Awkward To Eat Alone In A Restaurant Because Everybody's Looking At Me.

If You're A Woman And A Guy's Ever Said Anything Romantic To You, He Just Left Off The Second Part That Would Have Made You Sick If You Could Have Heard It.

I've Had Soccer Moms Come Up And Tell Me They Can Relate When I Say That I Want To Throw My Baby In The Trash.

Gay Men Have To Go Through Something To Own Their - Who They Are. They Get Beat Up. They Get Ostracized. Whatever They Go Through, If They Survive It, They Come Out Very Confident People.

To Me, Art Supplies Are Always Okay To Buy.

I Like Pressure. Pressure Doesn't Make Me Crack. It's Enabling. I Eat Pressure, And There Might Be Times When I Get A Bad Feeling In My Gut That This Might Be Too Much, But You Feel Pressure When You're Not Doing Something, You Know?

Most People Are Dead. Did You Know That? It's True, Out Of All The People That Ever Were, Almost All Of Them Are Dead.

America's A Family. We All Yell At Each Other. It All Works Out.

Every Day Starts, My Eyes Open And I Reload The Program Of Misery. I Open My Eyes, Remember Who I Am, What I'm Like, And I Just Go, 'Ugh'.

A Household Name Is Like Ketchup. Everybody Wants Ketchup. Ketchup Doesn't Hurt Anybody.

Technically, I've Learned That Having Good Legs And Wind Is Good For Being On Stage. You Have To Be In Shape And Have Endurance.

The Problem Is, The More Famous You Get, The More People See You Who Didn't Choose To.

A Lot Of Tv Is Put Together By Teams, By Writing Staffs And Several Different Directors. It's A Great, Very Smart Way To Make Television. It's Worked For However Long Tv's Been Around.

Some Things I Think Are Very Conservative, Or Very Liberal. I Think When Someone Falls Into One Category For Everything, I'm Very Suspicious. It Doesn't Make Sense To Me That You'd Have The Same Solution To Every Issue.

My Ex-wife, She Really Didn't Like The Material That I Did. And That's Something I Regret, That I Wasn't More Careful About Making Sure That She Was O.k. With It. I Just Sort Of Didn't Ask. So That's How That Goes.

If You're A Cartoon Character Or Most Tv Characters, Sure, You'll Fight, Because The Punches Are Juicy-sounding And They Don't Leave Marks. But In Real Life, If Somebody Punches You In The Eye, It Doesn't Make Any Noise And Your Eye Is Swollen For, Like, Six Months. It's A Nightmare To Get Punched In The Eye.

Perception Is Created And Twisted So Quickly.

I Don't Think Women Are Better Than Men, I Think Men Are A Lot Worse Than Women.

It's More Fun To Experience Things When You Don't Know What's Going To Happen.

I'm Bored' Is A Useless Thing To Say. You Live In A Great, Big, Vast World That You've Seen None Percent Of.

Comedy Isn't Polite And It Isn't Correct And It Isn't Accurate, Even. It's Just A Mess. So That's The Way That I Approach It.

I Wish I Could Know Everything Ever, Like That Would Be My Wish - That's What I Hope Heaven Is, That They Tell You Who Shot Jfk And All That Stuff.

Some Entertainers Don't Pay Attention To What's Going On Around Them.

I've Met A Lot Of People Who've Lost Their Jobs And They Still Have A Sense Of Humor.

I Think I'm Past Any Window Where I'm Suddenly Going To Become Surprisingly Ripped So That People Go, 'Oh, My God, What Happened To You?'

There's No Such Thing As A Cheap Laugh.

You Can't Cancel My Stand-up Tours. It's Impossible. There's Too Many Separate Bosses. There Is No 'Bosses.'

I Don't Think It Makes Any Sense To Try To Get Anyone To Not Talk.

I Know What It's Like To Have A Bunch Of Material That's Working That You Don't Care About. You Want To Die.

I Would Rather Be With My Kids Than Anybody Else.

To Me The Goal Of Comedy Is To Just Laugh, Which Is A Really High Hearted Thing, Visceral Connection And Reaction.

There's No Real Preparing At Home For Stand-up. You Just Go And You Just Do It.

When I Got Divorced, I Thought 'Well, There Goes My Act.'

People Get Successful And They Start Saying, 'Well Of Course I Am! I Was Chosen! I'm Special!' No, You're Not.