Bob Dylan is an American songwriter, singer, artist, and writer. He has been influential in popular music and culture for more than five decades. Much of his most celebrated work dates from the 1960s, when his songs chronicled social unrest. Early songs such as “Blowin’ in the Wind” and “The Times They Are a-Changin'” became anthems for the American civil rights and anti-war movements. Leaving behind his initial base in the American folk music revival, his six-minute single “Like a Rolling Stone”, recorded in 1965, enlarged the range of popular music. His accomplishments as a recording artist and performer have been central to his career, but songwriting is considered his greatest contribution. 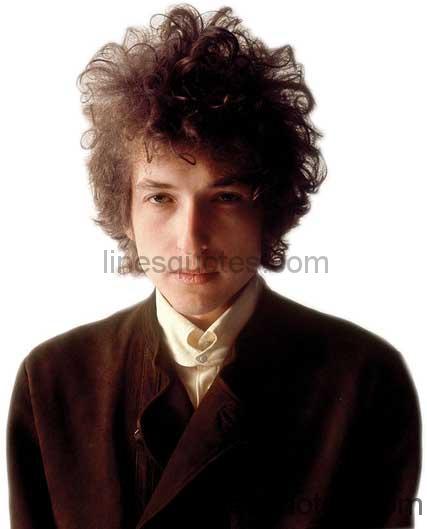 No One Is Free, Even The Birds Are Chained To The Sky.

I Kinda Live Where I Find Myself.

I Realize I Don't Do A Very Good Job In Keeping Up To Date, But I Try To.

I Don't Think I've Ever Been An Agnostic. I've Always Thought There's A Superior Power, That This Is Not The Real World And That There's A World To Come.

Here's The Thing With Me And The Religious Thing. This Is The Flat-out Truth: I Find The Religiosity And Philosophy In The Music. I Don't Find It Anywhere Else.

I Define Nothing. Not Beauty, Not Patriotism. I Take Each Thing As It Is, Without Prior Rules About What It Should Be.

You Hear A Lot About God These Days: God, The Beneficent; God, The All-great; God, The Almighty; God, The Most Powerful; God, The Giver Of Life; God, The Creator Of Death. I Mean, We're Hearing About God All The Time, So We Better Learn How To Deal With It. But If We Know Anything About God, God Is Arbitrary.

All I Can Do Is Be Me, Whoever That Is.

A Poem Is A Naked Person... Some People Say That I Am A Poet.

Chaos Is A Friend Of Mine.

All The Truth In The World Adds Up To One Big Lie.

He Not Busy Being Born Is Busy Dying.

I Have Dined With Kings, I've Been Offered Wings. And I've Never Been Too Impressed.

People Seldom Do What They Believe In. They Do What Is Convenient, Then Repent.

Take Care Of All Your Memories. For You Cannot Relive Them.

There Is Nothing So Stable As Change.

To Live Outside The Law, You Must Be Honest.

I Change During The Course Of A Day. I Wake And I'm One Person, And When I Go To Sleep I Know For Certain I'm Somebody Else.

I Accept Chaos, I'm Not Sure Whether It Accepts Me.

I Paint Mostly From Real Life. It Has To Start With That. Real People, Real Street Scenes, Behind The Curtain Scenes, Live Models, Paintings, Photographs, Staged Setups, Architecture, Grids, Graphic Design. Whatever It Takes To Make It Work.

All This Talk About Equality. The Only Thing People Really Have In Common Is That They Are All Going To Die.

I've Never Written A Political Song. Songs Can't Save The World. I've Gone Through All That.

At Times In My Life The Only Place I Have Been Happy Is When I Am On Stage.

A Hero Is Someone Who Understands The Responsibility That Comes With His Freedom.

I Can Be Jubilant One Moment And Pensive The Next, And A Cloud Could Go By And Make That Happen.

I Felt Like I Might As Well Have Been Living In Another Part Of The Solar System.

I Think I Have A Dualistic Nature.

Being Noticed Can Be A Burden. Jesus Got Himself Crucified Because He Got Himself Noticed. So I Disappear A Lot.

Some People Seem To Fade Away But Then When They Are Truly Gone, It's Like They Didn't Fade Away At All.

It's Hard To Speculate What Tomorrow May Bring.

I'll Let You Be In My Dreams If I Can Be In Yours.

In Ceremonies Of The Horsemen, Even The Pawn Must Hold A Grudge.

It's Not Easy To Define Poetry.

Nothing Can Affect My Voice, It's So Bad.

My Songs Always Sound A Lot Better In Person Than They Do On The Record.

Don't Matter How Much Money You Got, There's Only Two Kinds Of People: There's Saved People And There's Lost People.

Basically You Have To Suppress Your Own Ambitions In Order To Be Who You Need To Be.

Just Because You Like My Stuff Doesn't Mean I Owe You Anything.

I'm Speaking For All Of Us. I'm The Spokesman For A Generation.

Democracy Don't Rule The World, You'd Better Get That In Your Head; This World Is Ruled By Violence, But I Guess That's Better Left Unsaid.

I Consider Myself A Poet First And A Musician Second. I Live Like A Poet And I'll Die Like A Poet.

But Even The President Of The United States Sometimes Must Have To Stand Naked.

I Think Of A Hero As Someone Who Understands The Degree Of Responsibility That Comes With His Freedom.

A Mistake Is To Commit A Misunderstanding.

I'm Just Glad To Be Feeling Better. I Really Thought I'd Be Seeing Elvis Soon.

I'm More Of An Adventurous Type Than A Relationship Type.