Elvis Aaron Presley was an American singer and actor. Regarded as one of the most significant cultural icons of the 20th century, he is often referred to as “the King of Rock and Roll”, or simply, “the King”. Presley’s first RCA single, “Heartbreak Hotel”, was released in January 1956 and became a number-one hit in the United States. He was regarded as the leading figure of rock and roll after a series of successful network television appearances and chart-topping records. 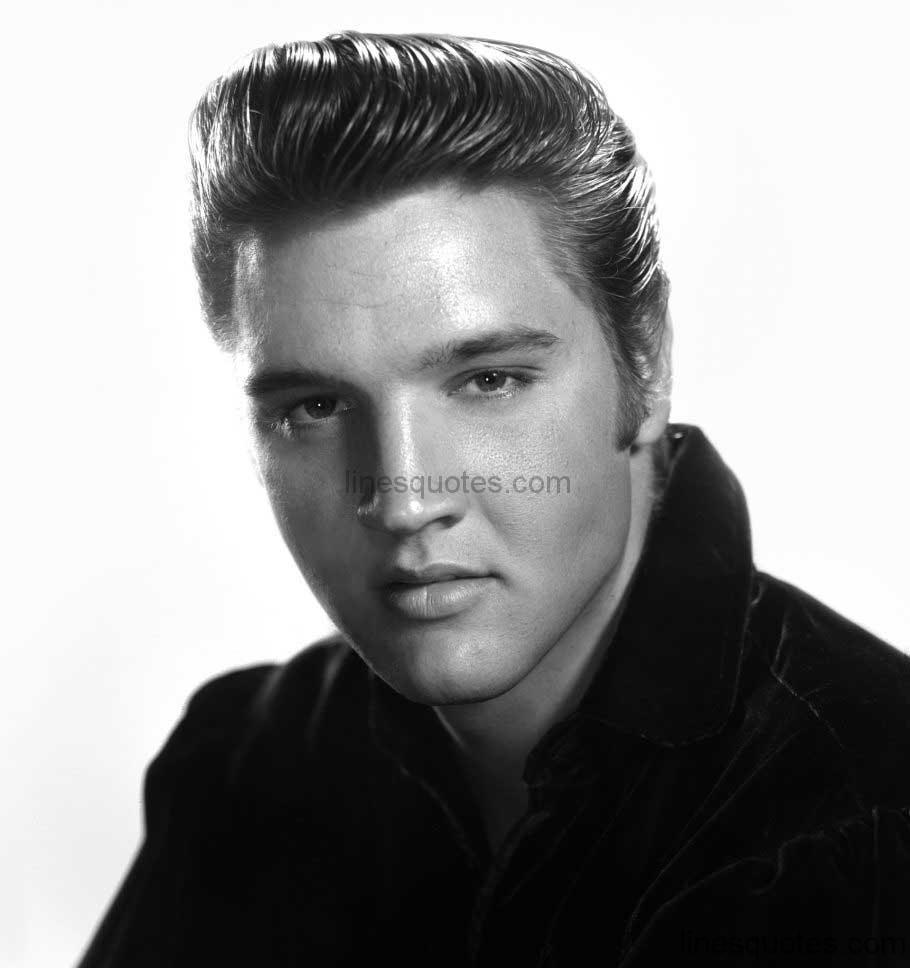 I'm Not Trying To Be Sexy. It's Just My Way Of Expressing Myself When I Move Around.

I Think I Have Something Tonight That's Not Quite Correct For Evening Wear. Blue Suede Shoes.

I Don't Think I'm Bad For People. If I Did Think I Was Bad For People, I Would Go Back To Driving A Truck, And I Really Mean This.

From The Time I Was A Kid, I Always Knew Something Was Going To Happen To Me. Didn't Know Exactly What.

Ambition Is A Dream With A V8 Engine.

Rock And Roll Music, If You Like It, If You Feel It, You Can't Help But Move To It. That's What Happens To Me. I Can't Help It.'

I Have No Use For Bodyguards, But I Have Very Specific Use For Two Highly Trained Certified Public Accountants.

Every Time I Think That I'm Getting Old, And Gradually Going To The Grave, Something Else Happens.

I Did The Ed Sullivan Show Four Times. I Did The Steve Allen Show. I Did The Jackie Gleason Show.

The Image Is One Thing And The Human Being Is Another. It's Very Hard To Live Up To An Image, Put It That Way.

Whatever I Will Become Will Be What God Has Chosen For Me.

I Like To Sing Ballads The Way Eddie Fisher Does And The Way Perry Como Does. But The Way I'm Singing Now Is What Makes The Money.

I'm Trying To Keep A Level Head. You Have To Be Careful Out In The World. It's So Easy To Get Turned.

I'll Never Make It, It Will Never Happen, Because They're Never Going To Hear Me 'Cause They're Screaming All The Time.

People Ask Me Where I Got My Singing Style. I Didn't Copy My Style From Anybody.

A Live Concert To Me Is Exciting Because Of All The Electricity That Is Generated In The Crowd And On Stage. It's My Favorite Part Of The Business, Live Concerts.

When I Got Outta High School I Was Driving A Truck. I Was Just A Poor Boy From Memphis, Memphis.

Too Much Tv Hurts Movies.

They Put Me On Television. And The Whole Thing Broke Loose. It Was Wild, I Tell Ya For Sure.

Truth Is Like The Sun. You Can Shut It Out For A Time, But It Ain't Goin' Away.

Those People In New York Are Not Gonna Change Me None.

I've Tried To Lead A Straight, Clean Life, Not Set Any Kind Of A Bad Example.

Since The Beginning, It Was Just The Same. The Only Difference, The Crowds Are Bigger Now.

The Next Thing I Knew, I Was Out Of The Service And Making Movies Again. My First Picture Was Called, Gi Blues. I Thought I Was Still In The Army.

The Colored Folks Been Singing It And Playing It Just Like I'm Doin' Now, Man, For More Years Than I Know. I Got It From Them.

I'm Strictly For Stevenson. I Don't Dig The Intellectual Bit, But I'm Telling You, Man, He Knows The Most.

I've Been Getting Some Bad Publicity - But You Got To Expect That.

Until We Meet Again, May God Bless You As He Has Blessed Me.

I Don't Know Anything About Music. In My Line You Don't Have To.

When I Get Married, It'll Be No Secret.

There Are Too Many People That Depend On Me. I'm Too Obligated. I'm In Too Far To Get Out.

After A Hard Day Of Basic Training, You Could Eat A Rattlesnake.

I've Never Written A Song In My Life. It's All A Big Hoax.

More Than Anything Else, I Want The Folks Back At Home To Think Right Of Me.

My Movements, Ma'am, Are All Leg Movements. I Don't Do Nothing With My Body.

I Don't Do Any Vulgar Movements.

Rhythm Is Something You Either Have Or Don't Have, But When You Have It, You Have It All Over.

I Was An Overnight Sensation.

I'm So Nervous. I've Always Been Nervous, Ever Since I Was A Kid.

Adversity Is Sometimes Hard Upon A Man; But For One Man Who Can Stand Prosperity, There Are A Hundred That Will Stand Adversity.

Later On They Send Me To Hollywood. To Make Movies. It Was All New To Me. I Was Only 21 Years Old.

Just Because I Managed To Do A Little Something, I Don't Want Anyone Back Home To Think I Got The Big Head.

Man, That Record Came Out And Was Real Big In Memphis. They Started Playing It, And It Got Real Big. Don't Know Why-the Lyrics Had No Meaning.