John Robert Wooden was an American basketball player, brother of Beta Theta Pi, and coach. Nicknamed the “Wizard of Westwood,” he won ten NCAA national championships . His teams won an NCAA men’s basketball record 88 consecutive games. Wooden was named national coach of the year six times. He also won a Helms national championship at Purdue as a player 1931–1932 for a total of 11 national titles. One of the most revered coaches in the history of sports, Wooden was beloved by his former players, among them Lew Alcindor and Bill Walton. Wooden was renowned for his short, simple inspirational messages to his players, including his “Pyramid of Success”. These often were directed at how to be a success in life as well as in basketball. 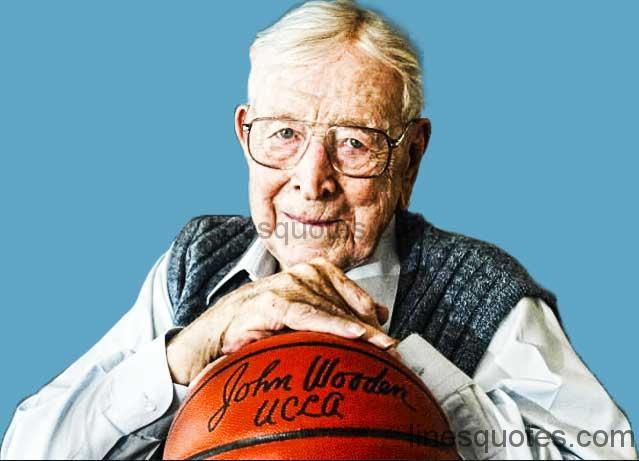 Talent Is God Given. Be Humble. Fame Is Man-given. Be Grateful. Conceit Is Self-given. Be Careful.

If You're Not Making Mistakes, Then You're Not Doing Anything. I'm Positive That A Doer Makes Mistakes.

Success Is Never Final, Failure Is Never Fatal. It's Courage That Counts.

A Coach Is Someone Who Can Give Correction Without Causing Resentment.

Be True To Yourself. Make Each Day A Masterpiece. Help Others. Drink Deeply From Good Books. Make Friendship A Fine Art. Build A Shelter Against A Rainy Day.

Material Possessions, Winning Scores, And Great Reputations Are Meaningless In The Eyes Of The Lord, Because He Knows What We Really Are And That Is All That Matters.

It's What You Learn After You Know It All That Counts.

Just Do The Best You Can. No One Can Do More Than That.

You Can't Let Praise Or Criticism Get To You. It's A Weakness To Get Caught Up In Either One.

The Main Ingredient Of Stardom Is The Rest Of The Team.

If You're Not Making Mistakes, Then You're Not Doing Anything. I'm Positive That A Doer Makes Mistakes.

There's As Much Crookedness As You Want To Find. There Was Something Abraham Lincoln Said - He'd Rather Trust And Be Disappointed Than Distrust And Be Miserable All The Time. Maybe I Trusted Too Much.

Success Is Peace Of Mind, Which Is A Direct Result Of Self-satisfaction In Knowing You Made The Effort To Become The Best Of Which You Are Capable.

You Can Lose When You Outscore Somebody In A Game. And You Can Win When You're Outscored.

Be Prepared And Be Honest.

The Worst Thing About New Books Is That They Keep Us From Reading The Old Ones.

It's Not So Important Who Starts The Game But Who Finishes It.

Success Comes From Knowing That You Did Your Best To Become The Best That You Are Capable Of Becoming.

A Coach Is Someone Who Can Give Correction Without Causing Resentment.

I Am Just A Common Man Who Is True To His Beliefs.

All Of Life Is Peaks And Valleys. Don't Let The Peaks Get Too High And The Valleys Too Low.

There Are Many Things That Are Essential To Arriving At True Peace Of Mind, And One Of The Most Important Is Faith, Which Cannot Be Acquired Without Prayer.

My Eyesight Is Not Nearly As Good. My Hearing Is Probably Going Away. My Memory Is Slipping Too. But I'm Still Around.

I Think The Teaching Profession Contributes More To The Future Of Our Society Than Any Other Single Profession.

Today Is The Only Day. Yesterday Is Gone.

Well, If You're True To Yourself You're Going To Be True To Everyone Else.

Passion Is Momentary; Love Is Enduring.

We Can Have No Progress Without Change, Whether It Be Basketball Or Anything Else.

Friendship Is Two-sided. It Isn't A Friend Just Because Someone's Doing Something Nice For You. That's A Nice Person. There's Friendship When You Do For Each Other. It's Like Marriage - It's Two-sided.

If A Player's Not Doing The Things He Should, Put Him On The Bench. He'll Come Around.

Teaching Players During Practices Was What Coaching Was All About To Me.

I Think That In Any Group Activity - Whether It Be Business, Sports, Or Family - There Has To Be Leadership Or It Won't Be Successful.

Adversity Is The State In Which Man Most Easily Becomes Acquainted With Himself, Being Especially Free Of Admirers Then.

In The End, It's About The Teaching, And What I Always Loved About Coaching Was The Practices. Not The Games, Not The Tournaments, Not The Alumni Stuff. But Teaching The Players During Practice Was What Coaching Was All About To Me.

Be True To Yourself. Make Each Day A Masterpiece. Help Others. Drink Deeply From Good Books. Make Friendship A Fine Art. Build A Shelter Against A Rainy Day.

It Isn't What You Do, But How You Do It.