General George Smith Patton Jr. was a senior officer of the United States Army . Patton’s colorful image, hard-driving personality and success as a commander were at times overshadowed by his controversial public statements. His philosophy of leading from the front and his ability to inspire troops with vulgarity-ridden speeches, such as a famous address to the Third Army, attracted favorable attention. His strong emphasis on rapid and aggressive offensive action proved effective. A popular, award-winning biographical film released in 1970 helped transform Patton into an American hero. 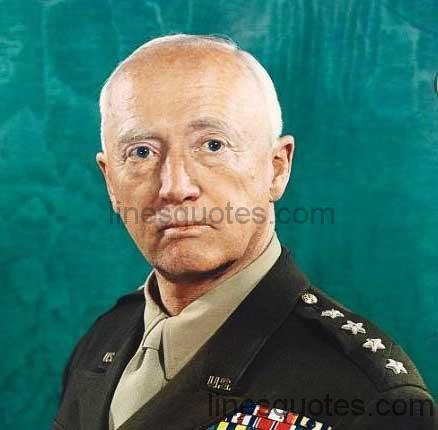 Accept The Challenges So That You Can Feel The Exhilaration Of Victory.

Watch What People Are Cynical About, And One Can Often Discover What They Lack.

Better To Fight For Something Than Live For Nothing.

Don't Tell People How To Do Things, Tell Them What To Do And Let Them Surprise You With Their Results.

We Herd Sheep, We Drive Cattle, We Lead People. Lead Me, Follow Me, Or Get Out Of My Way.

If A Man Does His Best, What Else Is There?

A Pint Of Sweat, Saves A Gallon Of Blood.

Courage Is Fear Holding On A Minute Longer.

Americans Play To Win At All Times. I Wouldn't Give A Hoot And Hell For A Man Who Lost And Laughed. That's Why Americans Have Never Lost Nor Ever Lose A War.

If You Tell People Where To Go, But Not How To Get There, You'll Be Amazed At The Results.

A Good Plan Violently Executed Now Is Better Than A Perfect Plan Executed Next Week.

Prepare For The Unknown By Studying How Others In The Past Have Coped With The Unforeseeable And The Unpredictable.

The Time To Take Counsel Of Your Fears Is Before You Make An Important Battle Decision. That's The Time To Listen To Every Fear You Can Imagine! When You Have Collected All The Facts And Fears And Made Your Decision, Turn Off All Your Fears And Go Ahead!

There Is Only One Sort Of Discipline, Perfect Discipline.

You Need To Overcome The Tug Of People Against You As You Reach For High Goals.

If We Take The Generally Accepted Definition Of Bravery As A Quality Which Knows No Fear, I Have Never Seen A Brave Man. All Men Are Frightened. The More Intelligent They Are, The More They Are Frightened.

Untutored Courage Is Useless In The Face Of Educated Bullets.

A Piece Of Spaghetti Or A Military Unit Can Only Be Led From The Front End.

Always Do Everything You Ask Of Those You Command.

Success Is How High You Bounce When You Hit Bottom.

Never Tell People How To Do Things. Tell Them What To Do And They Will Surprise You With Their Ingenuity.

All Very Successful Commanders Are Prima Donnas And Must Be So Treated.

Do Your Damnedest In An Ostentatious Manner All The Time.

It Is Foolish And Wrong To Mourn The Men Who Died. Rather We Should Thank God That Such Men Lived.

The Object Of War Is Not To Die For Your Country But To Make The Other Bastard Die For His.

Battle Is The Most Magnificent Competition In Which A Human Being Can Indulge. It Brings Out All That Is Best; It Removes All That Is Base. All Men Are Afraid In Battle. The Coward Is The One Who Lets His Fear Overcome His Sense Of Duty. Duty Is The Essence Of Manhood.

Take Calculated Risks. That Is Quite Different From Being Rash.

Wars May Be Fought With Weapons, But They Are Won By Men. It Is The Spirit Of Men Who Follow And Of The Man Who Leads That Gains The Victory.

If Everyone Is Thinking Alike, Then Somebody Isn't Thinking.