Kobe Bean Bryant is an American retired professional basketball player and businessman. He played his entire 20-year career with the Los Angeles Lakers of the National Basketball Association. He entered the NBA directly from high school and won five NBA championships with the Lakers. Bryant is an 18-time All-Star, 15-time member of the All-NBA Team, and 12-time member of the All-Defensive team. He led the NBA in scoring during two seasons, and ranks third on both the league’s all-time regular season scoring and all-time postseason scoring lists. He holds the NBA record for the most seasons playing with one franchise for an entire career. 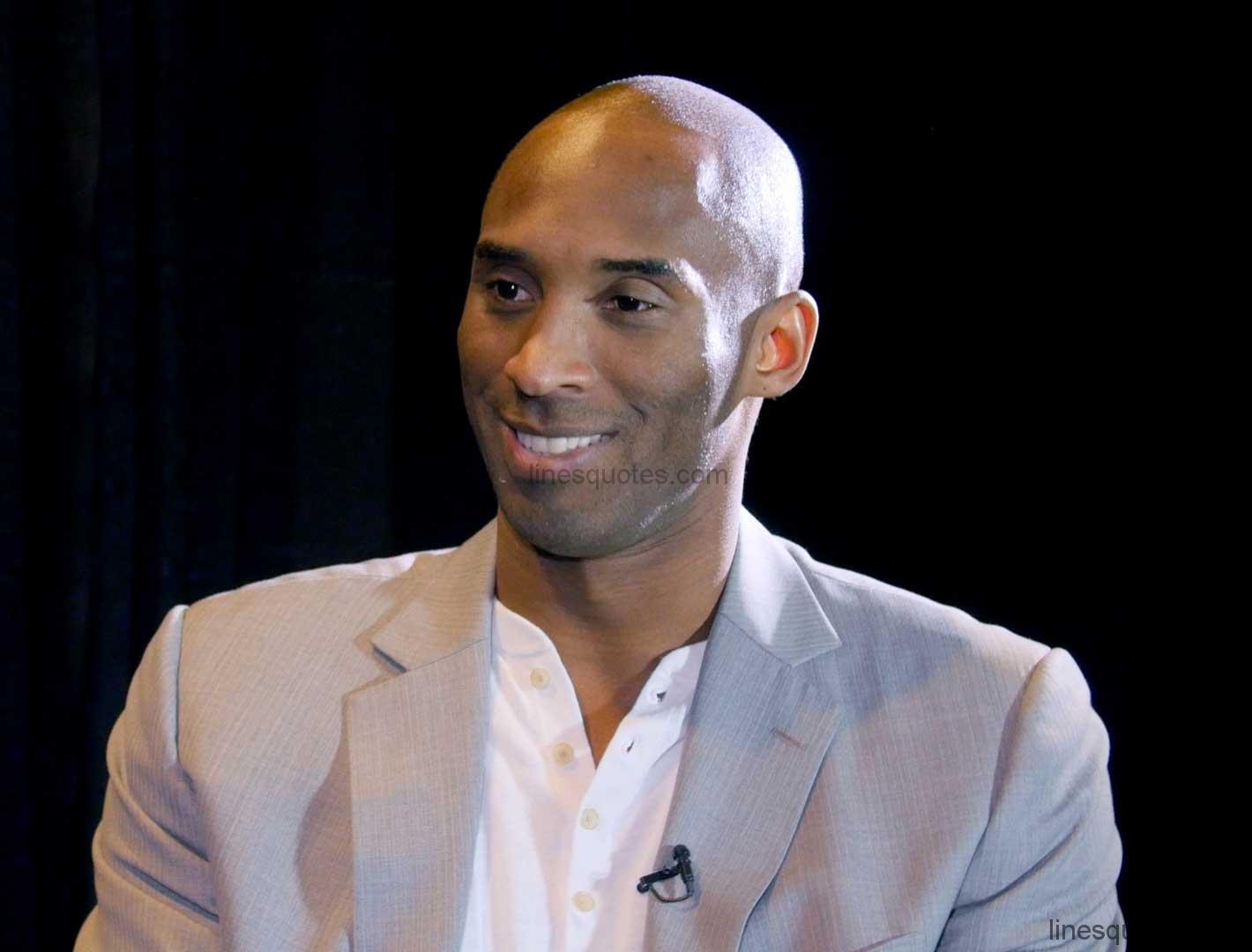 The Important Thing Is That Your Teammates Have To Know You're Pulling For Them And You Really Want Them To Be Successful.

Everything Negative - Pressure, Challenges - Is All An Opportunity For Me To Rise.

If There Were Camera Phones Back In The Day, The Biggest Athletes In The World Would Have Had A Lot Of Explaining To Do.

One Thing You Gotta Know About Me Is I Have Absolutely No Filter. I Have No Problem Saying What The Hell I Think Of Someone.

You Want Me To Own A Team And Deal With These Rich, Spoiled Stubborn Athletes, And Try To Get Them To Perform? No Thank You.

The People Who Truly Know Me Know What I'm Like. There Have Been People Who Try To Say Things That Aren't Fair, And I Check Them. And Then They Don't Like Me Because I Checked Them.

In An Individual Sport, Yes, You Have To Win Titles. Baseball's Different. But Basketball, Hockey? One Person Can Control The Tempo Of A Game, Can Completely Alter The Momentum Of A Series. There's A Lot Of Great Individual Talent.

The Topic Of Leadership Is A Touchy One. A Lot Of Leaders Fail Because They Don't Have The Bravery To Touch That Nerve Or Strike That Chord. Throughout My Years, I Haven't Had That Fear.

Can I Jump Over Two Or Three Guys Like I Used To? No. Am I As Fast As I Used To Be? No, But I Still Have The Fundamentals And Smarts. That's What Enables Me To Still Be A Dominant Player. As A Kid Growing Up, I Never Skipped Steps. I Always Worked On Fundamentals Because I Know Athleticism Is Fleeting.

I Don't Want To Be The Next Michael Jordan, I Only Want To Be Kobe Bryant.

I've Played With Ivs Before, During And After Games. I've Played With A Broken Hand, A Sprained Ankle, A Torn Shoulder, A Fractured Tooth, A Severed Lip, And A Knee The Size Of A Softball. I Don't Miss 15 Games Because Of A Toe Injury That Everybody Knows Wasn't That Serious In The First Place.

The Most Important Thing Is To Try And Inspire People So That They Can Be Great In Whatever They Want To Do.

My Parents Are My Backbone. Still Are. They're The Only Group That Will Support You If You Score Zero Or You Score 40.

Everyone Looks At Your Watch And It Represents Who You Are, Your Values And Your Personal Style.

It's Different From Being 21 And You Think There's Endless Amount Of Opportunities. At 33, The Ending Is Much, Much Closer.

I Love Going One-on-one With Someone. That's What I Do. I've Never Lost. It's A Whole Different Game, Just To Have Them Right In Front Of You And Be Able To Do Whatever You Want.

I've Got Four Dogs, And I Just Don't Do Dog Doo. I'm A Diva When It Comes To That.

What People See On Court Is Another Side Of Me; It's Not Me.

I Focus On One Thing And One Thing Only - That's Trying To Win As Many Championships As I Can.

I'm Extremely Willful To Win, And I Respond To Challenges. Scoring Titles And Stuff Like That... It Sounds, Well, I Don't Care How It Sounds - To Me, Scoring Comes Easy. It's Not A Challenge To Me To Win The Scoring Title, Because I Know I Can.

If You're Afraid To Fail, Then You're Probably Going To Fail.

People Just Don't Understand How Obsessed I Am With Winning.

I'm Not The Most Patient Of People.

Dropkick Murphys Get Me Going, Red Hot Chili Peppers, Nirvana... Plus, All The Regular Hip-hop Stuff.

Christmas Morning, I'm Going To Open Presents With My Kids. I'm Going To Take Pictures Of Them Opening The Presents. Then I'm Going To Come To The Staples Center And Get Ready To Work.

There's Been A Lot Of Talk Of Me Being A One-man Show But That's Simply Not The Case. We Win Games When I Score 40 Points And We've Won When I Score 10.

I'm Here. I'm Not Going Anywhere. No Matter What The Injury - Unless It's Completely Debilitating - I'm Going To Be The Same Player I've Always Been. I'll Figure It Out. I'll Make Some Tweaks, Some Changes, But I'm Still Coming.

I Don't Talk Trash Often, But When I Do, I Go For The Jugular.

The Only Thing I'm Afraid Of Is Bees. I Don't Like Bees. I'm Allergic To Them.

I Like Playing For The Purple And Gold. This Is Where I Want To Finish Up.

Winning Takes Precedence Over All. There's No Gray Area. No Almosts.

I Have Self-doubt. I Have Insecurity. I Have Fear Of Failure. I Have Nights When I Show Up At The Arena And I'm Like, 'My Back Hurts, My Feet Hurt, My Knees Hurt. I Don't Have It. I Just Want To Chill.' We All Have Self-doubt. You Don't Deny It, But You Also Don't Capitulate To It. You Embrace It.

Eeew, I'd Be A Little Uncomfortable Googling Myself. People Sit There - And Google Themselves? That's Kind Of Weird.

If I Panic, Everyone Else Panics.

I Don't Think A Coach Becomes The Right Coach Until He Wins A Championship.

Twitter Is Great To Connect With Fans And Be Transparent. I Enjoy That Aspect About It. But Really, I'm Still Trying To Figure It Out.

It's Hard For Me To Grasp The Concept Of Somebody Being Nervous When I'm Talking To Them.

I Draw From The Crowd A Lot.

Pooper Scooper? Yeah, I've Done It A Few Times. Every Once In A While, You Have To.

It's Disgusting, But My Father Taught Me When Your Mouth Gets Dry, Just Suck The Sweat Out Of Your Own Jersey. There's No Bravado To Any Of It; It's Just A Disgusting Little Trick.

The Black Mamba Collection Of Watches Is Me: It Is My Alter Ego, So To Speak. As I Mentioned Before, It Is Sharp, Cutting Edge And Sleek Which Are Characteristics I Try To Apply When I'm Out There On The Basketball Court.

I'll Do Whatever It Takes To Win Games, Whether It's Sitting On A Bench Waving A Towel, Handing A Cup Of Water To A Teammate, Or Hitting The Game-winning Shot.

I'm Reflective Only In The Sense That I Learn To Move Forward. I Reflect With A Purpose.

We All Know What Flopping Is When We See It. The Stuff That You See Is Where Guys Aren't Really Getting Hit At All And Are Just Flailing Around Like A Fish Out Of Water.

At The End Of 2003, My Game Was Complete. Shooting, Defense, Using The Dribble, Transition, Midrange Stuff Was All There. Then It Was About Fine-tuning And Trying To Improve In Each Area.