Yahoo Serious, born Greg Gomez Pead, is an Australian film actor, director, and score composer. He is best known for his 1988 comedy Young Einstein. He also created Reckless Kelly in 1993 and Mr. Accident in 2000. Serious writes, directs, produces, stars in, and has composed the scores for his movies. After leaving the apple isle for Sydney on the mainland to patent his discovery, he goes on to develop rock music and surfing, romances Marie Curie, and saves Paris from an atomic bomb. The film’s popularity propelled Serious to stardom which saw him appear on the cover of Time and Mad magazines, and even get his own primetime slot on MTV. The movie was a success in Australia but a critical and commercial flop in the United States. 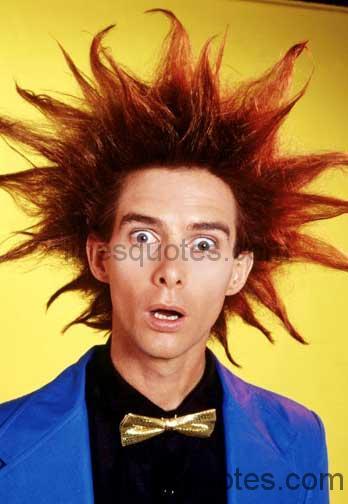 Now Both My Films Have Been Number One At The Australian Box Office And It Took About Two Years Just To Get The Finance For This Film, So If It's Hard For Me Then God Help Everyone Else.

Find Your Own Specific Voice In Filmmaking And Go For It. Either People Will Get It Or They Won't And That's What It's All About.

My Background Was Art School, Documentary Director And Surfer With A Keen Interest In Thrilling Acts Of Life Threatening Stupidity.

While The Eyes Of The World Will Be On Us Let's Show Everyone That We Have A Great Sense Of Humour.

I Just Wanted To Do This All Australian Film And We Didn't Want To Give Creative Control To Overseas 'Cause Whoever Comes On My Sets, Whether You're Sweeping The Floor Or An Actor, It Doesn't Matter Who Comes Up With The Ideas, It's A Collaboration.

Australians Don't Have A Preconceived Notion Of What Things Have To Be... We Can Go On A Fantastic Journey.

Getting Your Screenplay Right Is The Most Important Thing You'll Ever Do On Your Film.

The Journey Of Your First Movie Is Not Just Beyond Belief It Can Be Truly Beyond Satire.

We Live In A Time Where Government Is Not A Leadership Thing, It's More A Business That's Out There And Running Riot, So I Guess The People Have To Go Out There And Say Stuff.

It Was Always Easy For Me. I Was Born Very Rich And Lucky.

All The Jokes In My Films, The Comedy, They're Not Me, I Just Try To Hold A Big Mirror Up To Us.

I Don't Know What It Means To Be Out There Against The Olympics.

Movies Are A Complicated Collision Of Literature, Theatre, Music And All The Visual Arts.

I Kind Of Worry About That A Little Bit - We Lost Our Film Culture For 30 Years Because The Americans Came In And Bought Up All The Cinema Chains And Wouldn't Show Any Australian Films.

In A Kind Of A Way There's A Bit Of That Happening Now So We Have To Be Careful To Preserve Our Culture.

You Go Overseas And People Are Oppressed And Scared And Worried But We're Not Like That... We're More Like My Films And How People Come Out At The End Of Seeing Them - They Feel Good.

We Cheer Everyone Who Goes Off To Hollywood And Tells American Stories But Telling Australian Stories Is The Greatest Thing You Can Do.

Can You Imagine What It Would Be Like If All The Aussie Film Talent Was Able To Make Australian Stories?

We've Got So Many Stories To Tell, You Know, We Could Take On The World.

If Government And Media And All Of Us In The Australian Tribe Got Together, And The Rock Industry, We'd Just Be The Greatest Cultural Force The World Has Ever Seen - We're Such An Amazing Race.

I Support All Australian Films.

There Are A Thousand Weird Untold Stories In The Australian Film Industry, This Has Been One Of Them.

Hollywood Is Horrible... It's Beyond Satire.

So We Have To Be Careful Because If You Don't Protect Your Culture You Won't Have It For Very Long.

Three Years After Starting, By Physically Doing Everything From Raising The Finance To Special Effects, We'd Finally Cobbled Together Our Low Budget Film.

Then If Your Movie Clicks With Real Audiences, You'll Be Sucked Into Some Sort Of Hollywood Orbit. It's A Devil Of A Place Where The Only Religion That Really Counts Is Box Office.

In 1905 Albert Discovered Relativity, In 1906 He Invented Rock And Roll.

It's Because We Are So Flooded With American Culture That We're Startled When We See Ourselves Up There On The Screen.

It's An Infinite Creative Universe To Explore So Why Chase Conservative Options?

The Obsession Required To See A Feature Through From Concept To Release Is Not A Rational Thing To Do With Your Brief Time On This Planet. Nor Is It Something To Which An Intelligent Person Should Aspire.