Heraclitus of Ephesus was a pre-Socratic Greek philosopher, and a native of the city of Ephesus, then part of the Persian Empire. He was of distinguished parentage. Little is known about his early life and education, but he regarded himself as self-taught and a pioneer of wisdom. Heraclitus was famous for his insistence on ever-present change as being the fundamental essence of the universe, as stated in the famous saying, “No man ever steps in the same river twice”. 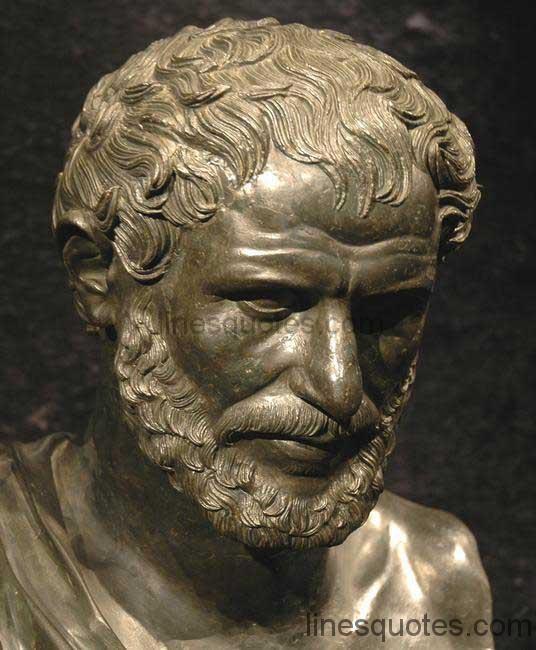 The Sun Is New Each Day.

Our Envy Always Lasts Longer Than The Happiness Of Those We Envy.

Much Learning Does Not Teach Understanding.

Nature Is Wont To Hide Herself.

Man Is Most Nearly Himself When He Achieves The Seriousness Of A Child At Play.

If You Do Not Expect The Unexpected You Will Not Find It, For It Is Not To Be Reached By Search Or Trail.

To Do The Same Thing Over And Over Again Is Not Only Boredom: It Is To Be Controlled By Rather Than To Control What You Do.

It Is Hard To Contend Against One's Heart's Desire; For Whatever It Wishes To Have It Buys At The Cost Of Soul.

A Man's Character Is His Fate.

To God Everything Is Beautiful, Good, And Just; Humans, However, Think Some Things Are Unjust And Others Just.

The Way Up And The Way Down Are One And The Same.

Men Who Wish To Know About The World Must Learn About It In Its Particular Details.

You Could Not Step Twice Into The Same Rivers; For Other Waters Are Ever Flowing On To You.

The Eyes Are More Exact Witnesses Than The Ears.

Couples Are Wholes And Not Wholes, What Agrees Disagrees, The Concordant Is Discordant. From All Things One And From One All Things.

The Chain Of Wedlock Is So Heavy That It Takes Two To Carry It - And Sometimes Three.

Bigotry Is The Sacred Disease.

Hide Our Ignorance As We Will, An Evening Of Wine Soon Reveals It.

Eyes And Ears Are Poor Witnesses To People If They Have Uncultured Souls.

A Man's Character Is His Guardian Divinity.

No One That Encounters Prosperity Does Not Also Encounter Danger.

Good Character Is Not Formed In A Week Or A Month. It Is Created Little By Little, Day By Day. Protracted And Patient Effort Is Needed To Develop Good Character.

I Am What Libraries And Librarians Have Made Me, With Little Assistance From A Professor Of Greek And Poets.

God Is Day And Night, Winter And Summer, War And Peace, Surfeit And Hunger.

Even Sleepers Are Workers And Collaborators In What Goes On In The Universe.

Corpses Are More Fit To Be Thrown Out Than Is Dung.

Deliberate Violence Is More To Be Quenched Than A Fire.

The Best People Renounce All For One Goal, The Eternal Fame Of Mortals; But Most People Stuff Themselves Like Cattle.

Justice Will Overtake Fabricators Of Lies And False Witnesses.

The Hidden Harmony Is Better Than The Obvious.

Opposition Brings Concord. Out Of Discord Comes The Fairest Harmony.

You Cannot Step Into The Same River Twice.

There Is Nothing Permanent Except Change.

Nothing Endures But Change.