Fyodor Mikhailovich Dostoyevsky, sometimes transliterated Dostoevsky, was a Russian novelist, short story writer, essayist, journalist and philosopher. Dostoyevsky’s literary works explore human psychology in the troubled political, social, and spiritual atmosphere of 19th-century Russia, and engage with a variety of philosophical and religious themes. He began writing in his 20s, and his first novel, Poor Folk, was published in 1846. Many literary critics rate him as one of the greatest psychologists in world literature. 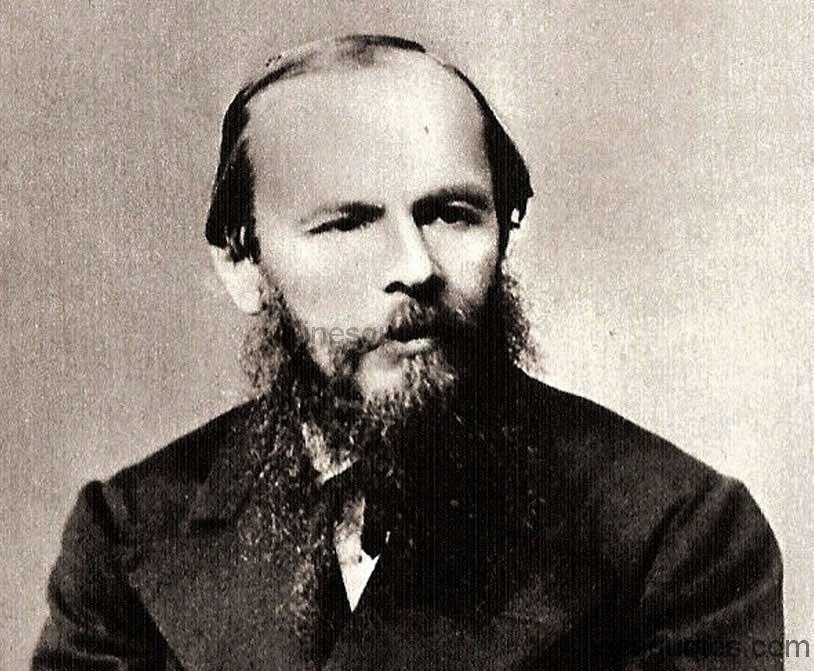 Much Unhappiness Has Come Into The World Because Of Bewilderment And Things Left Unsaid.

The Soul Is Healed By Being With Children.

It Is Not Possible To Eat Me Without Insisting That I Sing Praises Of My Devourer?

Happiness Does Not Lie In Happiness, But In The Achievement Of It.

Beauty Is Mysterious As Well As Terrible. God And Devil Are Fighting There, And The Battlefield Is The Heart Of Man.

If There Is No God, Everything Is Permitted.

To Love Someone Means To See Him As God Intended Him.

Power Is Given Only To Those Who Dare To Lower Themselves And Pick It Up. Only One Thing Matters, One Thing; To Be Able To Dare!

We Sometimes Encounter People, Even Perfect Strangers, Who Begin To Interest Us At First Sight, Somehow Suddenly, All At Once, Before A Word Has Been Spoken.

The Cleverest Of All, In My Opinion, Is The Man Who Calls Himself A Fool At Least Once A Month.

It Seems, In Fact, As Though The Second Half Of A Man's Life Is Made Up Of Nothing, But The Habits He Has Accumulated During The First Half.

Realists Do Not Fear The Results Of Their Study.

A Real Gentleman, Even If He Loses Everything He Owns, Must Show No Emotion. Money Must Be So Far Beneath A Gentleman That It Is Hardly Worth Troubling About.

Sarcasm: The Last Refuge Of Modest And Chaste-souled People When The Privacy Of Their Soul Is Coarsely And Intrusively Invaded.

Man, So Long As He Remains Free, Has No More Constant And Agonizing Anxiety Than Find As Quickly As Possible Someone To Worship.

If You Were To Destroy The Belief In Immortality In Mankind, Not Only Love But Every Living Force On Which The Continuation Of All Life In The World Depended, Would Dry Up At Once.

Men Do Not Accept Their Prophets And Slay Them, But They Love Their Martyrs And Worship Those Whom They Have Tortured To Death.

A Novel Is A Work Of Poetry. In Order To Write It, One Must Have Tranquility Of Spirit And Of Impression.

There Are Things Which A Man Is Afraid To Tell Even To Himself, And Every Decent Man Has A Number Of Such Things Stored Away In His Mind.

Man Only Likes To Count His Troubles, But He Does Not Count His Joys.

The Greatest Happiness Is To Know The Source Of Unhappiness.

To Live Without Hope Is To Cease To Live.

Man Is Fond Of Counting His Troubles, But He Does Not Count His Joys. If He Counted Them Up As He Ought To, He Would See That Every Lot Has Enough Happiness Provided For It.

The Formula 'Two And Two Make Five' Is Not Without Its Attractions.

There Is No Subject So Old That Something New Cannot Be Said About It.

One Can Know A Man From His Laugh, And If You Like A Man's Laugh Before You Know Anything Of Him, You May Confidently Say That He Is A Good Man.