Kendrick Lamar Duckworth is an American rapper and songwriter. He embarked on his musical career as a teenager under the stage name K-Dot. He began to gain major recognition in 2010, after his first retail release, Overly Dedicated. The following year, Lamar independently released his first studio album, Section.80, which included his debut single, “HiiiPoWeR”. Lamar has received a number of accolades over the course of his career, including seven Grammy Awards. In early 2013, MTV named Lamar the number one “Hottest MC in the Game”, on their annual list. 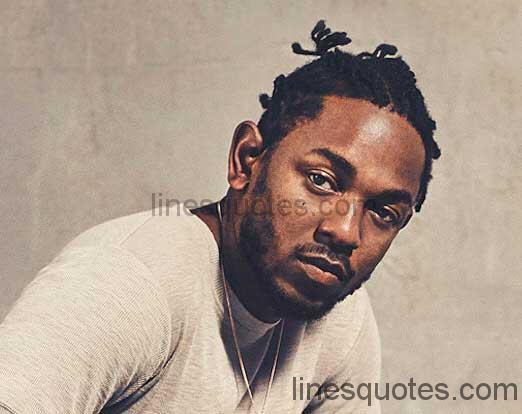 I'm Sticking To The Script, I'm Putting That Organic Feeling Back In The Game.

I'm Machiavelli's Offspring, I'm The King Of New York, King Of The Coast, One Hand, I Juggle Them Both.

My Folks Ain't Graduated From High School Or Nothing Like That, So We Always Had To Struggle In The Family - And I Come From A Big Family.

I Learned, When I Look In The Mirror And Tell My Story, That I Should Be Myself And Not Peep Whatever Everybody Is Doing.

My Mom's One Of 13 Siblings, And They All Got Six Kids, And Till I Was 13 Everybody Was In Compton.

I Can't Help The Way You Was Born If You Was Gay.

I Had To Come From Something, Come From A Place That Was Negative And Positive But The Majority Of It Is A Negative Place.

At First, I Was Scared To Show Fear Because You Can Never Be Sure How People Will Perceive You. But I Dared Myself To Do That, To Stand Out. Now I'll Talk About Being Beaten Up Or Robbed Or Making A Stupid Decision Because Of A Girl Or Whatever.

It's Easy To Forget Who You Are.

I Think My Vice Would Be Outdoing Myself.

Eventually You Get To This Point Where You Understand What You Want To Do And Get Across And Sound Like.

I Always Tell People That If I Move Anywhere It Would Be Toronto.

People Are Used To Music That Justifies Street Culture But Something That's Not Touched On Is Why These Kids Act The Way They Act, Live The Way They Live.

Sonnymoon And Quadrants Are A Couple Of Bands That Really Inspire Me In Terms Of The Melodics Of Things And Certain Tones And Just What Feels Good. It Takes Me Back To The Type Of Music That I Grew Up On In My Household. We Played A Lot Of Gangsta Rap, But We Also Played A Lot Of Oldies, And I Think That Mix Is Part Of What Inspires My Sound.

Groups Break Up Because They Never Got Across What They Wanted To Do Personally, And They Have Creative Differences, And Egos Start To Clash.

The Worst Part Of Success Is, To Me, Adapting To It. It's Scary.

Sometimes You Have The Trends That's Not That Cool. You May Have Certain Artists Portraying These Trends And Don't Really Have That Lifestyle, And Then It Gives Off The Wrong Thing. And It Becomes Kinda Corny After Awhile. It's Really About Keeping Hip-hop Original And Pushing Away The Corniness In It.

I've Got An Extra-specific Story About Dr. Dre. I Saw Him When I Was 9 Years Old In Compton - Him And Tupac. They Were Shooting The Second 'California Love' Video. My Pops Had Seen Him And Ran Back To The House And Got Me, Put Me On His Neck, And We Stood There Watching Dre And Pac In A Bentley.

God To Me Is Love.

As Long As My Music Is Real, It's No Limit To How Many Ears I Can Grab.

It's A Great, Great Experience To Finally Get The Reception That You Know You Rightfully Deserve.

People Gonna Be They Own Individuals And Have They Own Worlds And I Can't Knock It.

I'm Putting Out This Free Music, Constantly Putting It Out.

My Pops And My Mom Started Playing Marvin Gaye And The Isley Brothers And All These People, But At The Same Time, They Always Had Snoop On Right Behind It In The Same Mix.

You Don't Hear No Artists From Compton Showing Vulnerability.

I Don't Really Believe In The Type Of Pressure That People Are Wanting To Put On The Type Of Music That I Make.

When You Go On Your Twitter Or Look Down Your Timeline And It's All Great Positivity - I Love That. But At The Same Time, It Can Really Divert You From What Your Purpose Is Or What You're Trying To Do. And I've Seen Artists Get Caught Up In That.

I Always Thought Money Was Something Just To Make Me Happy. But I've Learned That I Feel Better Being Able To Help My Folks, 'Cause We Never Had Nothing. So Just To See Them Excited About My Career Is More Of A Blessing Than Me Actually Having It For Myself.

I Always Felt Like There Was A Certain Standard Of Music That I Had To Do From The Beginning, Even When I Didn't Have The Recognition That I Have Now.

I Knew I Was Blessed With A Gift Of Having Both Parents.

If I'm Gonna Tell A Real Story, I'm Gonna Start With My Name.

The Best Thing Is To Always Keep Honest People Around, Because When You Have A Bunch Of Yes Men Around That Know That You're Making A Mistake But Let You Go On With It, That's When It Ruins Your Mind State As An Artist.