Pablo Ruiz y Picasso, also known as Pablo Picasso, was a Spanish painter, sculptor, printmaker, ceramicist, stage designer, poet and playwright who spent most of his adult life in France. Regarded as one of the greatest and most influential artists of the 20th century, he is known for co-founding the Cubist movement, the invention of constructed sculpture, the co-invention of collage, and for the wide variety of styles that he helped develop and explore. Picasso demonstrated extraordinary artistic talent in his early years, painting in a naturalistic manner through his childhood and adolescence. Exceptionally prolific throughout the course of his long life, Picasso achieved universal renown and immense fortune for his revolutionary artistic accomplishments, and became one of the best-known figures in 20th-century art. 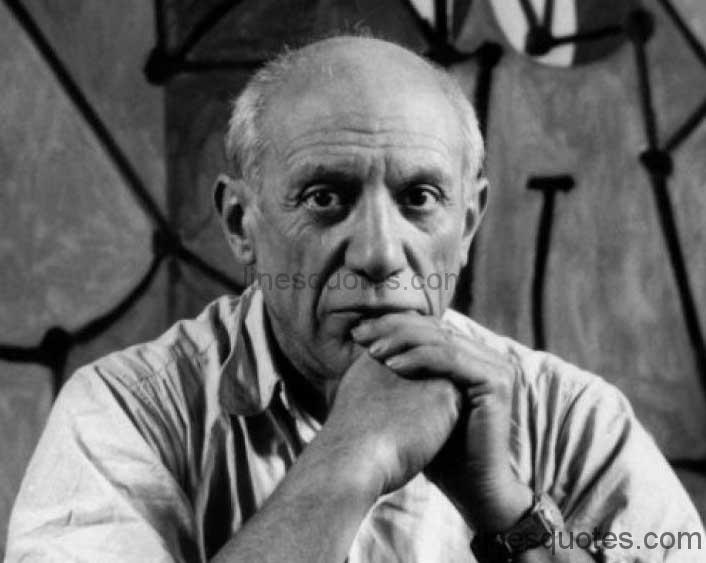 The Purpose Of Art Is Washing The Dust Of Daily Life Off Our Souls.

Every Act Of Creation Is First An Act Of Destruction.

Everything You Can Imagine Is Real.

Computers Are Useless. They Can Only Give You Answers.

Every Positive Value Has Its Price In Negative Terms... The Genius Of Einstein Leads To Hiroshima.

Are We To Paint What's On The Face, What's Inside The Face, Or What's Behind It?

I Paint Objects As I Think Them, Not As I See Them.

The Older You Get The Stronger The Wind Gets - And It's Always In Your Face.

Only Put Off Until Tomorrow What You Are Willing To Die Having Left Undone.

It Takes A Long Time To Become Young.

I Begin With An Idea And Then It Becomes Something Else.

What Is A Face, Really? Its Own Photo? Its Make-up? Or Is It A Face As Painted By Such Or Such Painter? That Which Is In Front? Inside? Behind? And The Rest? Doesn't Everyone Look At Himself In His Own Particular Way? Deformations Simply Do Not Exist.

Why Do Two Colors, Put One Next To The Other, Sing? Can One Really Explain This? No. Just As One Can Never Learn How To Paint.

Art Is Not The Application Of A Canon Of Beauty But What The Instinct And The Brain Can Conceive Beyond Any Canon. When We Love A Woman We Don't Start Measuring Her Limbs.

To Finish A Work? To Finish A Picture? What Nonsense! To Finish It Means To Be Through With It, To Kill It, To Rid It Of Its Soul, To Give It Its Final Blow The Coup De Grace For The Painter As Well As For The Picture.

We All Know That Art Is Not Truth. Art Is A Lie That Makes Us Realize The Truth, At Least The Truth That Is Given To Us To Understand.

Inspiration Exists, But It Has To Find Us Working.

Action Is The Foundational Key To All Success.

Art Is The Elimination Of The Unnecessary.

To Copy Others Is Necessary, But To Copy Oneself Is Pathetic.

The World Today Doesn't Make Sense, So Why Should I Paint Pictures That Do?

The Genius Of Einstein Leads To Hiroshima.

If There Were Only One Truth, You Couldn't Paint A Hundred Canvases On The Same Theme.

We Must Not Discriminate Between Things. Where Things Are Concerned There Are No Class Distinctions. We Must Pick Out What Is Good For Us Where We Can Find It.

Youth Has No Age.

They Ought To Put Out The Eyes Of Painters As They Do Goldfinches In Order That They Can Sing Better.

The Chief Enemy Of Creativity Is 'Good' Sense.

An Idea Is A Point Of Departure And No More. As Soon As You Elaborate It, It Becomes Transformed By Thought.

The People Who Make Art Their Business Are Mostly Imposters.

Our Goals Can Only Be Reached Through A Vehicle Of A Plan, In Which We Must Fervently Believe, And Upon Which We Must Vigorously Act. There Is No Other Route To Success.

When You Start With A Portrait And Search For A Pure Form, A Clear Volume, Through Successive Eliminations, You Arrive Inevitably At The Egg. Likewise, Starting With The Egg And Following The Same Process In Reverse, One Finishes With The Portrait.

Sculpture Is The Art Of The Intelligence.

Give Me A Museum And I'll Fill It.

To Draw You Must Close Your Eyes And Sing.

God Is Really Only Another Artist. He Invented The Giraffe, The Elephant And The Cat. He Has No Real Style, He Just Goes On Trying Other Things.

All Children Are Artists. The Problem Is How To Remain An Artist Once He Grows Up.

There Are Only Two Types Of Women - Goddesses And Doormats.

Who Sees The Human Face Correctly: The Photographer, The Mirror, Or The Painter?

When I Die, It Will Be A Shipwreck, And As When A Huge Ship Sinks, Many People All Around Will Be Sucked Down With It.

There Is No Abstract Art. You Must Always Start With Something. Afterward You Can Remove All Traces Of Reality.