John Winston Ono Lennon, MBE was an English singer and songwriter who co-founded the Beatles, the most commercially successful band in the history of popular music. With fellow member Paul McCartney, he formed a celebrated songwriting partnership. Lennon revealed a rebellious nature and acerbic wit in his music, writing, drawings, on film and in interviews. Controversial through his political and peace activism, he moved to Manhattan in 1971, where his criticism of the Vietnam War resulted in a lengthy attempt by Richard Nixon’s administration to deport him, while some of his songs were adopted as anthems by the anti-war movement and the larger counterculture. 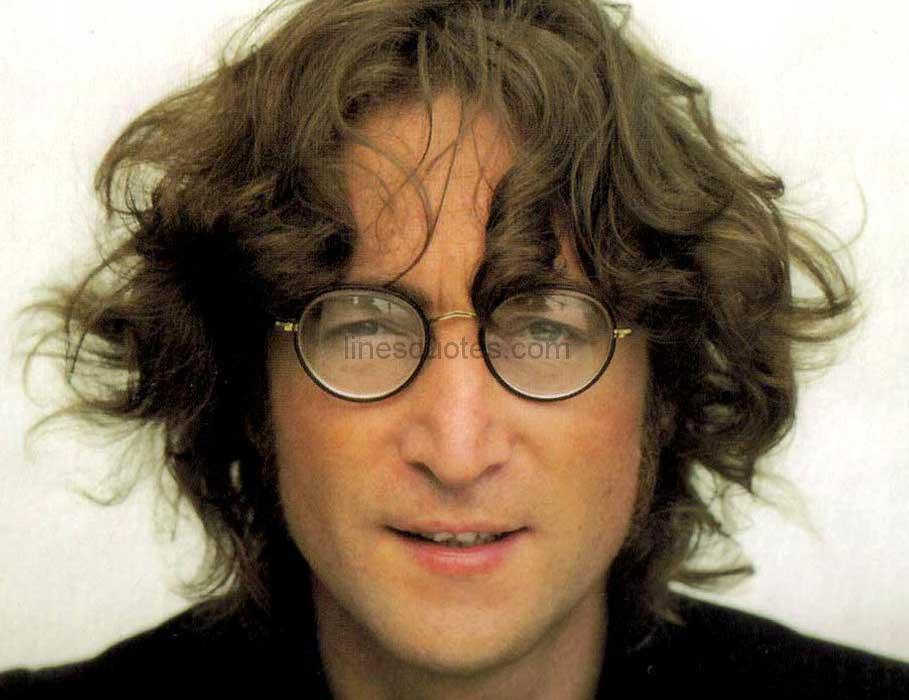 We've Got This Gift Of Love, But Love Is Like A Precious Plant. You Can't Just Accept It And Leave It In The Cupboard Or Just Think It's Going To Get On By Itself. You've Got To Keep Watering It. You've Got To Really Look After It And Nurture It.

These Critics With The Illusions They've Created About Artists - It's Like Idol Worship. They Only Like People When They're On Their Way Up... I Cannot Be On The Way Up Again.

The More I See The Less I Know For Sure.

Part Of Me Suspects That I'm A Loser, And The Other Part Of Me Thinks I'm God Almighty.

Jesus Was All Right, But His Disciples Were Thick And Ordinary. It's Them Twisting It That Ruins It For Me.

We Were All On This Ship In The Sixties, Our Generation, A Ship Going To Discover The New World. And The Beatles Were In The Crow's Nest Of That Ship.

Everything Is Clearer When You're In Love.

The Cross Of The Legion Of Honor Has Been Conferred On Me. However, Few Escape That Distinction.

The Basic Thing Nobody Asks Is Why Do People Take Drugs Of Any Sort? Why Do We Have These Accessories To Normal Living To Live? I Mean, Is There Something Wrong With Society That's Making Us So Pressurized, That We Cannot Live Without Guarding Ourselves Against It?

I Don't Believe In Killing Whatever The Reason!

Guilt For Being Rich, And Guilt Thinking That Perhaps Love And Peace Isn't Enough And You Have To Go And Get Shot Or Something.

Lots Of People Who Complained About Us Receiving The Mbe Received Theirs For Heroism In The War - For Killing People. We Received Ours For Entertaining Other People. I'd Say We Deserve Ours More.

Love Is The Answer, And You Know That For Sure; Love Is A Flower, You've Got To Let It Grow.

Surrealism Had A Great Effect On Me Because Then I Realised That The Imagery In My Mind Wasn't Insanity. Surrealism To Me Is Reality.

Reality Leaves A Lot To The Imagination.

I Believe In Everything Until It's Disproved. So I Believe In Fairies, The Myths, Dragons. It All Exists, Even If It's In Your Mind. Who's To Say That Dreams And Nightmares Aren't As Real As The Here And Now?

When You're Drowning, You Don't Say 'I Would Be Incredibly Pleased If Someone Would Have The Foresight To Notice Me Drowning And Come And Help Me,' You Just Scream.

The Postman Wants An Autograph. The Cab Driver Wants A Picture. The Waitress Wants A Handshake. Everyone Wants A Piece Of You.

Imagine All The People Living Life In Peace. You May Say I'm A Dreamer, But I'm Not The Only One. I Hope Someday You'll Join Us, And The World Will Be As One.

All We Are Saying Is Give Peace A Chance.

You Either Get Tired Fighting For Peace, Or You Die.

Christianity Will Go. It Will Vanish And Shrink. I Needn't Argue With That; I'm Right And I Will Be Proved Right. We're More Popular Than Jesus Now; I Don't Know Which Will Go First - Rock And Roll Or Christianity.

The Thing The Sixties Did Was To Show Us The Possibilities And The Responsibility That We All Had. It Wasn't The Answer. It Just Gave Us A Glimpse Of The Possibility.

My Role In Society, Or Any Artist's Or Poet's Role, Is To Try And Express What We All Feel. Not To Tell People How To Feel. Not As A Preacher, Not As A Leader, But As A Reflection Of Us All.

Our Society Is Run By Insane People For Insane Objectives. I Think We're Being Run By Maniacs For Maniacal Ends And I Think I'm Liable To Be Put Away As Insane For Expressing That. That's What's Insane About It.

Music Is Everybody's Possession. It's Only Publishers Who Think That People Own It.

Yeah We All Shine On, Like The Moon, And The Stars, And The Sun.

It Was Like Being In The Eye Of A Hurricane. You'd Wake Up In A Concert And Think, Wow, How Did I Get Here?

Love Is The Flower You've Got To Let Grow.

I Believe Time Wounds All Heels.

And God Help Bruce Springsteen When They Decide He's No Longer God... They'll Turn On Him, And I Hope He Survives It.

You Have To Be A Bastard To Make It, And That's A Fact. And The Beatles Are The Biggest Bastards On Earth.

I Don't Know Which Will Go First - Rock 'N' Roll Or Christianity.

He Didn't Come Out Of My Belly, But My God, I've Made His Bones, Because I've Attended To Every Meal, And How He Sleeps, And The Fact That He Swims Like A Fish Because I Took Him To The Ocean. I'm So Proud Of All Those Things. But He Is My Biggest Pride.

God Is A Concept By Which We Measure Our Pain.

There's Nothing You Can Know That Isn't Known.

You're Just Left With Yourself All The Time, Whatever You Do Anyway. You've Got To Get Down To Your Own God In Your Own Temple. It's All Down To You, Mate.

Rituals Are Important. Nowadays It's Hip Not To Be Married. I'm Not Interested In Being Hip.

Life Is What Happens While You Are Busy Making Other Plans.

It Doesn't Matter How Long My Hair Is Or What Colour My Skin Is Or Whether I'm A Woman Or A Man.

If You Tried To Give Rock And Roll Another Name, You Might Call It 'Chuck Berry'.

Everybody Loves You When You're Six Foot In The Ground.

Will The People In The Cheaper Seats Clap Your Hands? And The Rest Of You, If You'll Just Rattle Your Jewelry.

All You Need Is Love.