Prince Rogers Nelson was an American singer-songwriter, multi-instrumentalist, and record producer. He was a musical innovator who was known for his eclectic work, flamboyant stage presence, extravagant dress and makeup, and wide vocal range. His music integrates a wide variety of styles, including funk, rock, R&B, new wave, soul, psychedelia, and pop. He has sold over 100 million records worldwide, making him one of the best-selling artists of all time.He won seven Grammy Awards, an American Music Award, a Golden Globe Award, and an Academy Award for the film Purple Rain. 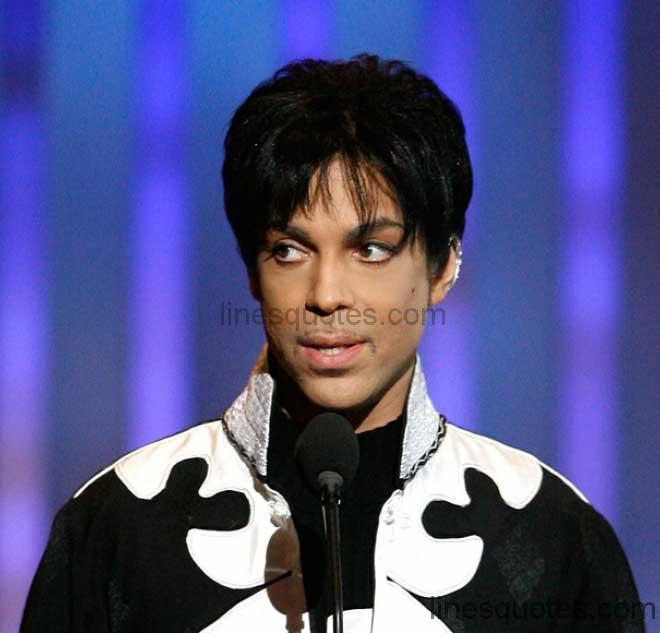 Youtube Is The Hippest Network, And They Abuse Copyright Right And Left.

I Learned From Jehovah's Witnesses That A Fatalistic View Is Counterproductive.

My Bankers Are Very Happy With Me.

I Don't Vote And I Got Nothing To Do With It.

Every Day I Feel Is A Blessing From God. And I Consider It A New Beginning. Yeah, Everything Is Beautiful.

Every Year, They Ask Me To Play The Grammys.

Any Business Situation Is Restrictive.

The Hardest Thing With Musicians Is Getting Them Not To Play.

It's Work To Play The Same Songs The Same Way For 70 Shows.

Young People Have Decided They Like To Listen To Music In A Certain Way, Through Ear Buds, And That's Fine With Me As Long As It Doesn't Bother Them That They're Not Hearing 90 Percent Of The Music That Way.

I Pride Myself On Working With Great Musicians.

I Record All The Time.

There Are No Great Jazz-fusion Bands.

It Gets Embarrassing To Say Something Untrue Because You Put It Online And Everyone Knows About It, So It's Better To Tell The Truth.

Most People Don't Want To Talk About Politics And Religion. They Say, 'Let's Talk About Something Else.'

The Music, For Me, Doesn't Come On A Schedule. I Don't Know When It's Going To Come, And When It Does, I Want It Out.

I Always Wanted To Make A Three-record Set. 'Sign O' The Times' Was Originally Supposed To Be A Triple Album, But It Ended Up As A Double.

I've Always Understood The Two To Be Intertwined: Sexuality And Spirituality. That Never Changed.

When You Sit Down To Write Something, There Should Be No Guidelines. The Main Idea Is Not Supposed To Be, 'How Many Different Ways Can We Sell It?' That's So Far Away From The True Spirit Of What Music Is.

Everyone Has A Rock Bottom.

I'm Thankful Enough Or Blessed Enough To Be Able To Say That Miles Davis Was A Friend When He Was Alive, And He Was A Wonderful Mentor And Really, Really Funny, You Know.

At One Time, Mtv Was Hip And Suddenly It Became Outdated.

Despite Everything, No One Can Dictate Who You Are To Other People.

You Can Always Tell When The Groove Is Working Or Not.

The Key To Longevity Is To Learn Every Aspect Of Music That You Can.

Doing A Residency In Any Particular City Requires A Large Repertoire To Ensure Repeat Business.

The Gatekeepers Must Change.

Music Is Music, Ultimately. If It Makes You Feel Good, Cool.

I'm Not Entangled In A Bunch Of Lawsuits And A Web That I Can't Get Out Of. I Can Hold My Head Up... A Happily Married Man Who Has His Head In Order. There Isn't A Bunch Of Scandal In My Life.

I Learned From Jimi Hendrix. They All Wanted Him To Do The Tricks, And At The End Of His Career, He Just Wanted To Play. I Lived Longer Than He Did, And I Can See How Those Pressures Can Really Play With Your Head.

I Used To Have Seizures When I Was Young. My Mother And Father Didn't Know What To Do Or How To Handle It But They Did The Best They Could With What Little They Had.

I Really Believe In Finding New Ways To Distribute My Music.

Time Is A Mind Construct. It's Not Real.

I Ain't Mad At Anybody. I Don't Have Any Enemies.

When It Comes To The Video Channels And The Programs, The Radio Stations, The Music Is Geared Towards Kids, And It's Made By Kids.

I Don't See Why I Should Give My New Music To Itunes Or Anyone Else. They Won't Pay Me An Advance For It And Then They Get Angry When They Can't Get It.

When I Found Out That There Was Eight Presidents Before George Washington, I Wanted To Smack Somebody.

Each Audience Is Different.

Prophecy Is What We All Have To Go By Now.

There's This Thing Called Compulsory Licensing Law That Allows Artists Through The Record Companies To Take Your Music At Will Without Your Permission.

Anyway, All These Computers And Digital Gadgets Are No Good. They Just Fill Your Head With Numbers And That Can't Be Good For You.

Being A Jehovah's Witness, I Don't Celebrate Birthdays Or Holidays. I Don't Vote.

I Have Friends That Are Gay, And We Study The Bible Together.

You Can't Understand The Words Of Cocteau Twins Songs, But Their Harmonies Put You In A Dreamlike State.