Vladimir Volfovich Zhirinovsky is a Russian politician and leader of the Liberal Democratic Party of Russia. He is fiercely nationalist and has been described as “a showman of Russian politics, blending populist and nationalist rhetoric, anti-Western invective and a brash, confrontational style”. His views have been described as fascist. Zhirinovsky is a long-time member of the State Duma and held the post of Deputy Chairman of the Duma from 2000 to 2011. 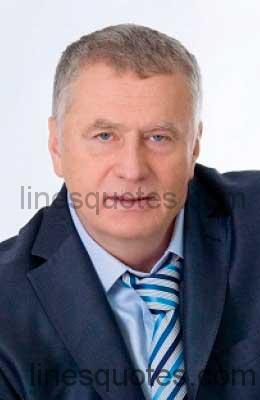 The Civilized World Needs To Think About A Decision When Single Politicians Are Not Allowed To Stay In Power.

We Must Force The Government To Stop The Bird Migration. We Must Shoot All Birds, Field All Our Men And Troops... And Force Migratory Birds To Stay Where They Are.

There Is No Problem With The Opening Of New Houses Of Prayer For Lutherans And Pentecostals.

The Only Thing I Oppose Is Persecuting Of Eastern Orthodox Priests And Temples.

Military Police Is Very Timely For Our Army.

I've Never Signed Any Contract And Never Received A Cent From Iraq.

The West Will Have To Choose: Either To Come To Terms With Russians, Or To Receive A Retaliatory Blow. This Retaliatory Blow Will Not Be By Means Of War. We Will Resort To The Same Weapon: Nationalism.

Europe Has United, China Is Growing Speedily And Russia Possesses Immense Power In Terms Of Fuel Resources. The Us Administration Cannot Do Anything About It.

I Believe In Full Freedom For Christians Of All Denominations.

Let Catholics Build Their Own Churches And Works.

The Usa Experiences The Crisis Of Ideological And Moral Values.

We Don't Need This Religious Cosmopolitanism. It's No Good.

And, For Instance, Baptists, Adventists, Lutherans, Pentecostals - Let Them Exist On Line With Others.

I Didn't Sign Any Contracts, And I Didn't See Any Oil.

Here In Russia,, In Many Cities, People Are Irritated By Caucasian Intrusion. Caucasians Come From Foreign Countries; They Are Ubiquitous: In Markets, Shops, Hotels, Restaurants. They Misbehave, And In This Sense We Have Feelings Similar To Those That The Germans Have Toward The Turks And The French Toward Algerians.

I'm Against The Capturing Of Eastern Orthodox Temples.

Russia Is An Eastern Orthodox Country.

We'll Limit In All Ways The Work Of Religious Faiths Which Are Foreign To Us.

We'll Surely Stop The Work Of All Western Christian And Eastern Religions, And Also Islam.

A Mother-in-law Is Better Than A Single And Childless Political Persona, Though.

The Matter Of International Relations Is Very Subtle And Exquisite.

There Is No Such Thing As Russian Fascism. You Won't Find A Single Russian Who Considers Russians To Be A Superior Race And Who Advocate Expulsion Of Aliens.

Americans Try To Talk About Positive Family Values, Although The Actual State Of Things Is Disastrous.

I Mean, In General, The Danger Is From Oriental Faiths And Islam.

If Russia Rises, It Means That The Usa Falls Down.