Diana, Princess of Wales, was the first wife of Charles, Prince of Wales, who is the eldest child and heir apparent of Queen Elizabeth II. Diana was born into a family of British nobility with royal ancestry as The Honourable Diana Spencer. She was the fourth child and third daughter of John Spencer, Viscount Althorp, and the Honourable Frances Roche. In 1975, after her father inherited the title of Earl Spencer, she became Lady Diana Spencer. Diana remained the object of worldwide media scrutiny during and after her marriage. Media attention and public mourning were extensive after her death in a car crash in Paris on 31 August 1997 and subsequent televised funeral. 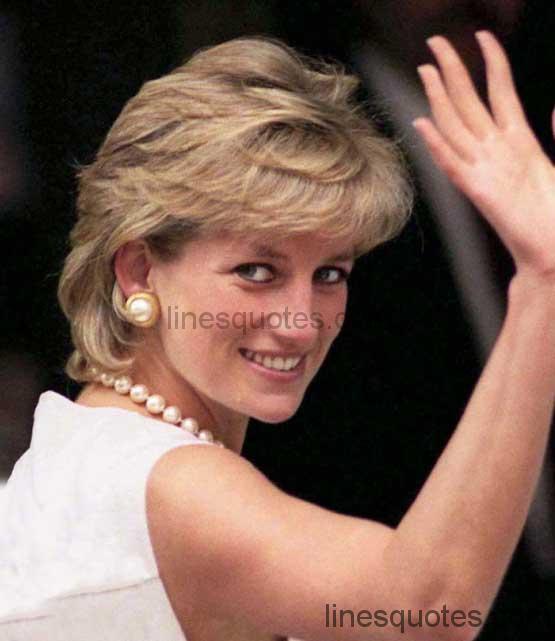 Hiv Does Not Make People Dangerous To Know, So You Can Shake Their Hands And Give Them A Hug: Heaven Knows They Need It.

Hugs Can Do Great Amounts Of Good - Especially For Children.

I Think The Biggest Disease The World Suffers From In This Day And Age Is The Disease Of People Feeling Unloved. I Know That I Can Give Love For A Minute, For Half An Hour, For A Day, For A Month, But I Can Give. I Am Very Happy To Do That, I Want To Do That.

There Were Three Of Us In This Marriage, So It Was A Bit Crowded.

Carry Out A Random Act Of Kindness, With No Expectation Of Reward, Safe In The Knowledge That One Day Someone Might Do The Same For You.

So Many People Supported Me Through My Public Life And I Will Never Forget Them.

I Like To Be A Free Spirit. Some Don't Like That, But That's The Way I Am.

I'd Like To Be A Queen In People's Hearts But I Don't See Myself Being Queen Of This Country.

Life Is Just A Journey.

The Greatest Problem In The World Today Is Intolerance. Everyone Is So Intolerant Of Each Other.

Family Is The Most Important Thing In The World.

They Say It Is Better To Be Poor And Happy Than Rich And Miserable, But How About A Compromise Like Moderately Rich And Just Moody?

I Want My Boys To Have An Understanding Of People's Emotions, Their Insecurities, People's Distress, And Their Hopes And Dreams.

When You Are Happy You Can Forgive A Great Deal.

Nothing Brings Me More Happiness Than Trying To Help The Most Vulnerable People In Society. It Is A Goal And An Essential Part Of My Life - A Kind Of Destiny. Whoever Is In Distress Can Call On Me. I Will Come Running Wherever They Are.

I Knew What My Job Was; It Was To Go Out And Meet The People And Love Them.

People Think That At The End Of The Day A Man Is The Only Answer. Actually, A Fulfilling Job Is Better For Me.

I Don't Go By The Rule Book... I Lead From The Heart, Not The Head.

The Biggest Disease This Day And Age Is That Of People Feeling Unloved.

Everyone Of Us Needs To Show How Much We Care For Each Other And, In The Process, Care For Ourselves.

I Don't Even Know How To Use A Parking Meter, Let Alone A Phone Box.

What Must It Be Like For A Little Boy To Read That Daddy Never Loved Mummy?

Only Do What Your Heart Tells You.

Only Do What Your Heart Tells You.

I Live For My Sons. I Would Be Lost Without Them.

I'm Aware That People I Have Loved And Have Died And Are In The Spirit World Looking After Me.

I'm As Thick As A Plank.

I Will Fight For My Children On Any Level So They Can Reach Their Potential As Human Beings And In Their Public Duties.

I Think Like Any Marriage, Especially When You've Had Divorced Parents Like Myself; You Want To Try Even Harder To Make It Work.

It's Vital That The Monarchy Keeps In Touch With The People. It's What I Try And Do.

I Wear My Heart On My Sleeve.

You Can't Comfort The Afflicted With Afflicting The Comfortable.

Any Sane Person Would Have Left Long Ago. But I Cannot. I Have My Sons.

Anywhere I See Suffering, That Is Where I Want To Be, Doing What I Can.

If Men Had To Have Babies, They Would Only Ever Have One Each.

The Kindness And Affection From The Public Have Carried Me Through Some Of The Most Difficult Periods, And Always Your Love And Affection Have Eased The Journey.

I Don't Want Expensive Gifts; I Don't Want To Be Bought. I Have Everything I Want. I Just Want Someone To Be There For Me, To Make Me Feel Safe And Secure.

If You Find Someone You Love In Your Life, Then Hang On To That Love.

Being A Princess Isn't All It's Cracked Up To Be.