Obie Trice III is an American rapper and songwriter. He is most known for his time spent signed to Shady Records. Since leaving the label, Trice has formed his own record label, Black Market Entertainment. He does not use a stage name, but rather uses his birth name on stage. By the age of fourteen, he was attending rap battle gatherings around Detroit, including the Hip Hop Shop, where he and his friends would go on Saturday afternoons. 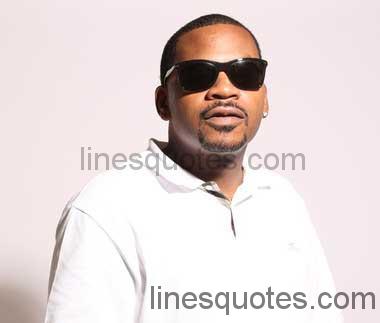 But Since I Am In The Music Industry, I Don't Want Anyone To Download Music, Not On September 9th.

I Want To Get Off With The Screenwriting.

Well, Eminem, You Know, I Know Him Longer. Ive Been Signed To His Label Since 2001 And He's A Good Friend.

I Just Don't Want To Be Rapping Forever. I Love It, But Sometimes You Got Goals For Yourself.

Let's Say I Was A Plumber, Or I Worked At A Factory, I Would Download Music, You Feel What I'm Saying?

But Working With Dre, I Grew Up With His Music, So I'm Still Like More A Fan.

Eminem Is More Like A Friend. And I'm Also A Fan On Eminem.

I Think It Need Realness, You Should Speak On Thing That You Know About, That You Being From, That You Experienced Or That You Been Around, You Know. I Think You Need A Good Hook, Good Beats And Good Lyrics.

I Get The Music, I Get The Beats. And I Go To The Studios And Write The Lyrics.

Detroit Is Right Now A New Mecca For Hip Hop.

I Just Do What I'm Here For And That's To Make That Music.

Yeah I Grew Up On The Westside Of Detroit.

Downloading Songs Is Not Good.

I Don't Want To Be An Actor Or Nothing But If I Have To, I'll Act If It's The Right Thing.

The Anger Management Tour Was Another Beautiful Thing. I Loved That Tour.

I Don't Actually Sit Down And Write, But I Just Have A Lot Of Different Ideas About Films And Making Movies.

Beef Is Beef, You Know. Beef Comes, So Beef Is Real.

Working With 50 Cent Was Great, You Know What Im Saying? It Was Just Great To Work With 50 Cent.

I Would Say Old School Cats Like Redman And Wu-tang. My Style Is My Style, Those Are Just Cats That I Liked.

I Was About 11 When My Mother Brought Me This Karaoke Machine And I Was Really Into It Back Then, But About 4 Or 5 Years Ago Is When I Started Printing Up My Own Music, Going To The Studio And Doing My Own Thing.

You Know, I'm The 1st Black Solo Mc From Detroit. I Didn't Do The 50 Cent Sales But Hey... I Got A Long Career, I'm Still Young And I'm Trying To Bring Really Good Music.

7 Mile Is Like An Ave. Back In The Days It Was Poppin' In The Summer Time.