O’Shea Jackson Jr., known by his stage name OMG, is an American actor and rapper. O’Shea is the son of rapper Ice Cube and he portrayed his father in the 2015 biopic Straight Outta Compton, which was his feature film debut. 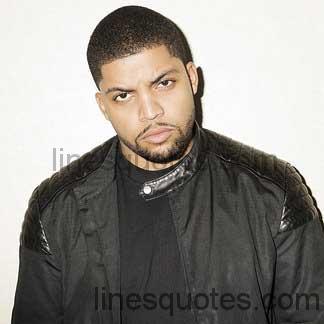 My Parents Wouldn't Have Sent Me Out Into The World With Wool Over My Eyes. You Have To Be Aware, Or You'll Be Swallowed.

Have Confidence In Everything. No Matter What It Is That You're Doing, Know That You Can Do It Better Than Anyone.

When, You Know, When You're Playing Basketball, You Have To Have Confidence In Your Moves If They're Gonna Work.

The Trials My Father Went Through Were Things Most Young Black Males Have To Go Through. There Was Nothing He Shielded From Me, Because It Doesn't Matter How You Grow Up, Those Who Oppress Will Oppress. It's All Completely Relatable; Everyone Feels Nwa.

Being On Set With My Dad - That's So Cool. People Always Ask Me If That Made Me Nervous, But It's The Same Element When You're A Kid - When Your Parents Come In The Auditorium For Those School Performances. It Calms You.

It's Always Extremities When You Are A Young Black Male Dealing With Law Enforcement.

The Stress And Turmoil That My Father Had To Go Through At A Young Age To Make Sure That I Didn't Have The Same Trials And Tribulations, I Couldn't Be More Grateful.

Our Trials And Our Times Of Pain Get The Most Recognition, But 'Straight Outta Compton' Speaks To Triumph. When It's Doubtful, When Nobody Is On Your Side, When Your Back Is Against The Wall, You Triumph And Make It Through. Showing Growth Through Movies Promotes Growth.

I Want More Movies Like 'Straight Outta Compton.' Showing Our Stories Of Triumph, We'll Make It Through, And We'll Get To Something Better.

This Entire Cast, N.w.a, Was An All-star Group, And I Really Feel Like People Are Going To Look At 'Straight Outta Compton' Years From Now Like This Was An All-star Cast.

Usc Has Really Developed My Love For The Cinema.

I Want To Pursue A Career In Film.

Music Is Always There, But If You're Asking Me My First Love, It's Film.