Dolly Rebecca Parton is an American singer, songwriter, multi-instrumentalist, record producer, actress, author, businesswoman, and philanthropist, known primarily for her work in country music . Parton is the most honored female country performer of all time. Achieving 25 RIAA certified Gold, Platinum, and Multi-Platinum awards, she has had 25 songs reach No. 1 on the Billboard country music charts, a record for a female artist. She is also one of the few to have received at least one nomination from the Academy Awards, Grammy Awards, Tony Awards, and Emmy Awards. 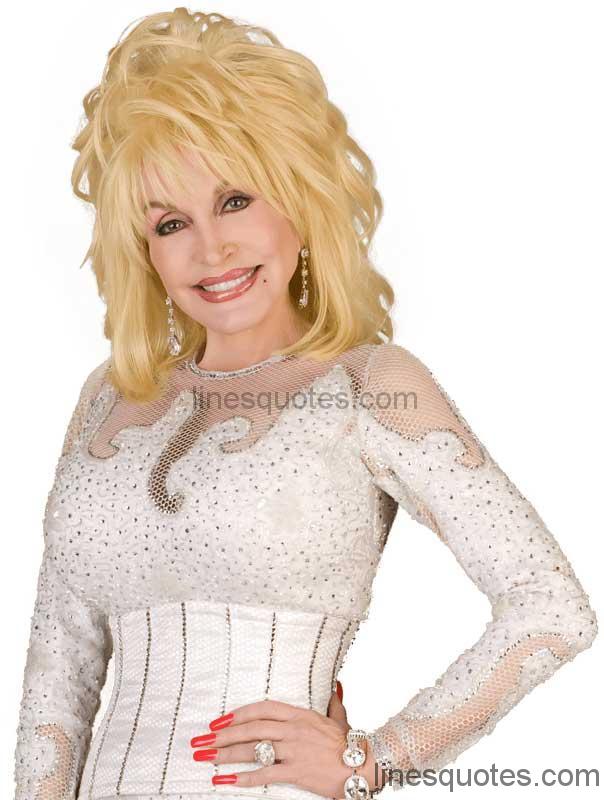 The Way I See It, If You Want The Rainbow, You Gotta Put Up With The Rain.

I Modelled My Looks On The Town Tramp.

You'll Never Do A Whole Lot Unless You're Brave Enough To Try.

When I'm Inspired, I Get Excited Because I Can't Wait To See What I'll Come Up With Next.

You'd Be Surprised How Much It Costs To Look This Cheap!

I Look Just Like The Girls Next Door... If You Happen To Live Next Door To An Amusement Park.

I'm Not A Politician. And I Don't Want To Be.

I've Enjoyed All The Parts Of My Career.

I Do Remember How It Was To Be Poor. I Do Remember That In My Early Years, We Had To Grow And Raise All Of Our Food, Even Our Animals. And I Remember In My Early Life, We Didn't Even Have Electricity. So It Was Very, Very Hard Times Then.

I Have Surrounded Myself With Very Smart People.

I Love To Flirt, And I've Never Met A Man I Didn't Like.

I'm Gonna Be Making Records Anyway, Even If I Had To Sell 'Em Out Of The Trunk Of My Car. I'm That Kind Of Musician And Singer.

If I See Something Sagging, Bagging Or Dragging I'll Get It Nipped, Tucked Or Sucked.

If I Hadn't Been A Woman, I'd Be A Drag Queen For Sure. I Like All That Flair And I'd Be Dressing Up In Them High Heels And Putting On The Big Hair. I'd Be Like Ru Paul.

I Have A Big Gay And Lesbian Following And They've Been Very Loyal And Kind To Me.

I'm Not Happy All The Time, And I Wouldn't Want To Be Because That Would Make Me A Shallow Person. But I Do Try To Find The Good In Everybody.

Oh, I Can Spot A Phoney A Mile Away.

I've Been Around Longer Than Most Of My Fans Have Been Alive.

People Get A Kick Out Of My Stupidity.

I've Never Been A Feminist.

I Have Tennis Shoes With Little Rhinestones That I Slip On If I Exercise. But I Always Wear Heels, Even Around The House. I'm Such A Short Little Thing, I Can't Reach My Kitchen Cabinets.

I Think There Is A Little Magic In The Fact That I'm So Totally Real But Look So Artificial At The Same Time.

I Usually Get Up At 3 A.m. I Don't Require A Lot Of Sleep, And If I Get Tired, I'll Take A Powernap During The Day.

There Are Some Loony People In This World!

I Just Don't Have Time To Get Old!

I Love Traveling All Over The World; But It's True: There's Nothing Like Home.

I Am Confident That Partnering My Dollywood Company With A Great Company Like Gaylord Will Create Something Truly Special.

I Have Little Bones.

Most Country Songs, Certainly All The Stuff I've Written, Are Stories Driven By Characters.

I Have Had Some Cosmetic Surgery, Especially After I Lost Weight And Stuff, And I've Had My Breasts Lifted - But Not Injected. That Would Scare Me To Death, Anyway.

I Will Not Play Just An Evil Part. In Fact, I Got Offered $7 Million Several Years Ago To Play The Part That Faye Dunaway Played In 'Supergirl.' I Was Kind Of Insulted. I Was Impressed With The Money, But I Said, 'Why Are You Asking Me To Play An Evil Witch? Do I Come Across As An Evil Witch To You?'

A Lot Of People Don't Realise I Came Out Of The Smoky Mountains With A Load Of Songs.

I Feel That Sin And Evil Are The Negative Part Of You, And I Think It's Like A Battery: You've Got To Have The Negative And The Positive In Order To Be A Complete Person.

I've Been To Those Places Where It's 'Poor, Pitiful Me.'

You Don't See Too Many Atheists On The Deathbed. They All Start Cramming Then.

I Try To See The Good In Everybody, And I Don't Care Who People Are As Long As They're Themselves, Whatever That Is.

All My Momma's People Were Very Musical. My Grandpa, Who Was The Pentecostal Minister, He Was A Great Musician. He Played The Fiddle, He Played The Piano.

A Lot Of My Heartbreak Songs Are Inspired By Things My Sisters Are Going Through, Or Friends.

I Think So Many People Live Their Whole Life In Fear And Doubt And Shame.

I Do Have A Few Little Tattoos, But They Were Mostly Done To Cover Scars Because I'm So Fair.

I Did Not, Thank The Lord, Have To Have A Hysterectomy.

Every Seven Years, I Sit Down And Make A Whole New Plan.

When I Wake Up, I Expect Things To Be Good. If They're Not, Then I Try To Set About Trying To Make Them As Good As I Can 'Cause I Know I'm Gonna Have To Live That Day Anyway. So Why Not Try To Make The Most Of It If You Can? Some Days, They Pan Out A Little Better Than Others, But You Still Gotta Always Just Try.

I Come From A Family Of 12, So I Kind Of Got A Little Lost As A Child.

I Love Being Busy.

I Don't Think You Ever Really Know What All You're Doing, So You Have To Act On Faith.