Yahya Abdul-Aziz Jemus Junkung Jammeh is the outgoing President of the Gambia. As a young army officer, he took power in a 1994 military coup. He was elected as President in 1996; he was re-elected in 2001, 2006, and 2011. He was defeated by Adama Barrow in the 2016 election. Although he initially conceded defeat, on 9 December 2016, he later refused to recognise the results. President Jammeh joined the Gambian National Army in 1984, was commissioned a Second Lieutenant in 1989, and in August 1992 became commanding officer of the Military Police of Yundum Barracks. He received extensive military training in neighboring Senegal, and military police training at Fort McClellan, Alabama. 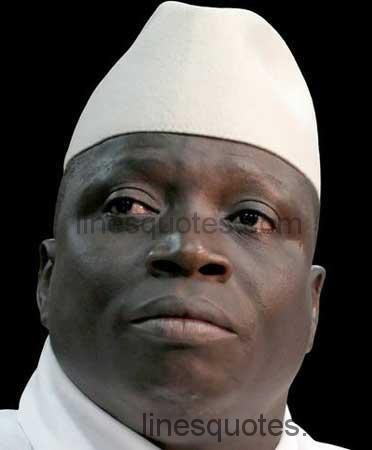 May We Be Saved From Evil Thoughts And Deed Of Enemies Of World Peace Who Find Pleasure In Creating Havoc And Perpetrating All Forms Of Carnage.

When Your Neighbour's House Is On Fire, You Should Help With A Bucket Of Water.

What Brought The British To The Gambia In The First Place - Which Was Bigger Than It Is Now - Was Trade In Ivory Because The Gambia Had A Lot Of Elephants. They Wiped Out All The Elephants And Ended Up Selling Africans.

As Far As I Am Concerned, Lgbt Can Only Stand For Leprosy, Gonorrhea, Bacteria, And Tuberculosis, All Of Which Are Detrimental To Human Existence.

I Can Cure Aids, And I Will.

Any One Who Wants To Live In Peace And Freedom Will Be To Live By Toil, Demonstration Of High Levels Of Discipline And Tolerance For One Another.

I Have Never Seen Homosexual Chicken Or Turkey.

If I Want To Ban Any Newspaper, I Will, With Good Reason.

Apartheid Was In South Africa; Now It Has Been Transferred To Palestine.

The Missile That Downed The Malaysian Plane, They Say, Is A Russian-made Missile. But The Weapons That Are Used In The Barbarism In The Barbaric Act Against The Palestinians Were Made By The West, And Nobody Is Blaming Them. Nobody Talks About It; Not Even The U.n. Security Council Can Pass A Resolution Against Israel!

Despite All Odds We Have Emerged As One People And One Country.

You Cannot Be In Your Offices Every Day Doing Nothing... And At The End Of The Day You Expect To Be Paid.

I Don't Believe In Killing People. I Believe In Locking You Up For The Rest Of Your Life.

Some People Go To The West And Claim They Are Gays And That Their Lives Are At Risk In The Gambia, In Order For Them To Be Granted A Stay In Europe.

Today, The Origin Of 90% Of All The Edible Food Gambians Consume Are From Places They Have Never Heard Of.

Most Of The Sicknesses We Suffer From Are From The Things We Eat.

If You Don't Show Care And Love For Your Children And Leave The Mothers To Take Care Of All Their Needs, If They Grow Up, They Will Also Not Consider You.

Our Forefathers Used To Live Longer And Healthy Lives.

My Fate Is In The Hands Of Almighty Allah. I Will Deliver To The Gambian People And If I Have To Rule This Country For One Billion Years, I Will, If Allah Says So.

My Fate Is In The Hands Of Almighty Allah.

Homosexuals Are Not Welcome In The Gambia.