Frederick Douglass was an African-American social reformer, abolitionist, orator, writer, and statesman. After escaping from slavery in Maryland, he became a national leader of the abolitionist movement in Massachusetts and New York, gaining note for his dazzling orator and incisive antislavery writings. In his time he was described by abolitionists as a living counter-example to slaveholders’ arguments that slaves lacked the intellectual capacity to function as independent American citizens. Northerners at the time found it hard to believe that such a great orator had once been a slave. Douglass was a firm believer in the equality of all peoples, whether black, female, Native American, or recent immigrant. 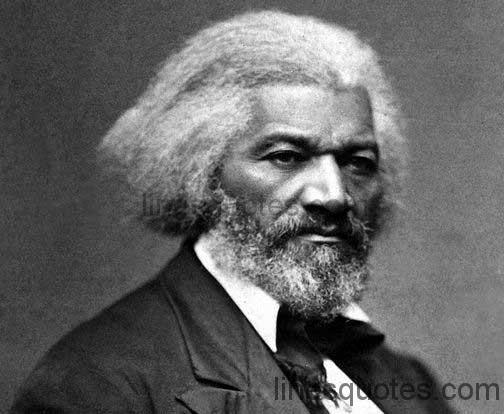 It Is Easier To Build Strong Children Than To Repair Broken Men.

The Thing Worse Than Rebellion Is The Thing That Causes Rebellion.

A Battle Lost Or Won Is Easily Described, Understood, And Appreciated, But The Moral Growth Of A Great Nation Requires Reflection, As Well As Observation, To Appreciate It.

Man's Greatness Consists In His Ability To Do And The Proper Application Of His Powers To Things Needed To Be Done.

When Men Sow The Wind It Is Rational To Expect That They Will Reap The Whirlwind.

Fugitive Slaves Were Rare Then, And As A Fugitive Slave Lecturer, I Had The Advantage Of Being The First One Out.

One And God Make A Majority.

To Suppress Free Speech Is A Double Wrong. It Violates The Rights Of The Hearer As Well As Those Of The Speaker.

The Soul That Is Within Me No Man Can Degrade.

I Prayed For Twenty Years But Received No Answer Until I Prayed With My Legs.

I Prefer To Be True To Myself, Even At The Hazard Of Incurring The Ridicule Of Others, Rather Than To Be False, And To Incur My Own Abhorrence.

Power Concedes Nothing Without A Demand. It Never Did And It Never Will.

At A Time Like This, Scorching Irony, Not Convincing Argument, Is Needed.

A Little Learning, Indeed, May Be A Dangerous Thing, But The Want Of Learning Is A Calamity To Any People.

People Might Not Get All They Work For In This World, But They Must Certainly Work For All They Get.

No Man Can Put A Chain About The Ankle Of His Fellow Man Without At Last Finding The Other End Fastened About His Own Neck.

I Am A Republican, A Black, Dyed In The Wool Republican, And I Never Intend To Belong To Any Other Party Than The Party Of Freedom And Progress.

Slaves Are Generally Expected To Sing As Well As To Work.

What To The Slave Is The 4th Of July.

I Could, As A Free Man, Look Across The Bay Toward The Eastern Shore Where I Was Born A Slave.

Those Who Profess To Favor Freedom, And Yet Depreciate Agitation, Are Men Who Want Crops Without Plowing Up The Ground.

Where Justice Is Denied, Where Poverty Is Enforced, Where Ignorance Prevails, And Where Any One Class Is Made To Feel That Society Is An Organized Conspiracy To Oppress, Rob And Degrade Them, Neither Persons Nor Property Will Be Safe.

A Man's Character Always Takes Its Hue, More Or Less, From The Form And Color Of Things About Him.

I Recognize The Republican Party As The Sheet Anchor Of The Colored Man's Political Hopes And The Ark Of His Safety.

The Limits Of Tyrants Are Prescribed By The Endurance Of Those Whom They Oppress.

Everybody Has Asked The Question, And They Learned To Ask It Early Of The Abolitionists, 'What Shall We Do With The Negro?' I Have Had But One Answer From The Beginning. Do Nothing With Us! Your Doing With Us Has Already Played The Mischief With Us.

We Have To Do With The Past Only As We Can Make It Useful To The Present And The Future.

Without A Struggle, There Can Be No Progress.

It Is Not Light That We Need, But Fire; It Is Not The Gentle Shower, But Thunder. We Need The Storm, The Whirlwind, And The Earthquake.

Those Who Profess To Favor Freedom, And Yet Deprecate Agitation, Are Men Who Want Crops Without Plowing Up The Ground.

The White Man's Happiness Cannot Be Purchased By The Black Man's Misery.

I Didn't Know I Was A Slave Until I Found Out I Couldn't Do The Things I Wanted.

Find Out Just What Any People Will Quietly Submit To And You Have The Exact Measure Of The Injustice And Wrong Which Will Be Imposed On Them.